* For those of you who are interested in having your childhood TV shows plastered in terrible CGI on the big screen…The Smurfs trailer has finally arrived.  It’s kind of funny, but on the whole, it’s not looking amazing.

* Kind of sad news.  Christopher Corbould, who won the Academy Award this year for his special effects work in Inception is now on trial for his part in the death of a camera man that happened during the filming of The Dark Knight (in 2007).  The court is alleging that he failed to do the proper safety checks prior to the stunt, which could have prevented the man’s death.  More info here.

* Earlier this week we had news that Guillermo Del Toro’s Mountains of Madness was dead, but that he may already have another project lined up.  Well, a press release from Legendary Pictures has now confirmed that Pacific Rim (a monster movie) will be his next project, and he’s official signed on to direct.

* Nickelodeon is hard at work on a new Teenage Mutant Ninja Turtles show, and Wall Street Journal managed to snag the first look at them from the new show. 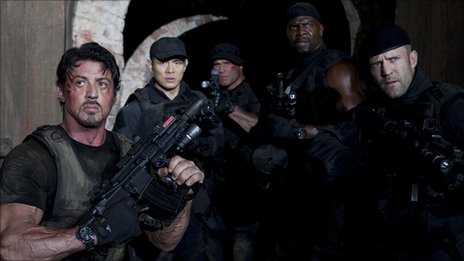 * Reports are coming in that Sylvester Stallone will NOT be directing The Expendables 2, and in fact is meeting with directors to take his place.

* The Farrelly brothers are close to signing on Johnny Knoxville for their The Three Stooges adaptation.

* MGM has hired Josh Zetumer to write the script for their Robocop reboot.  He’s not well-known now, but he’s worked on some high-profile pictures that have yet to be released.

That’s it for this time around.  Remember, if you’ve got a scoop, picture, or video you think should be apart of our News Bits section, shoot us an email via our contact page.