Seth MacFarlane’s newest project Ted is quickly heating up.  After casting Mark Wahlberg in the lead role a couple months ago, MacFarlane quickly cast Mila Kunis as the female lead and Wahlberg’s girlfriend.  Shortly after, Giovanni Ribisi (Avatar) was cast in a supporting role.  Finally, Joel McHale of Community and Web Soup was cast as Rex, Mark Wahlberg’s boss who countinuosly tries to scam Mila Kunis’ character.  Now Seth MacFarlane is bringing in another familiar face for the ride.

Deadline reports that Patrick Warburton, voice of Joe Swanson on Seth MacFarlane’s Fox sitcom Family Guy, has been cast in Ted. Warburton is famous for playing characters such as Puddy on Seinfeld, Kronk in The Empereor’s New Groove, and The Tick on The Tick. One of the most established character actors ever, Warburton is famous for his very distinctive voice.  He will be playing Guy, “the sexually confused co-worker of John (Wahlberg) at the Enterprise Rent-A-Car front office.”  Yup, big tough guy is really gay.  CLA-SSIC MacFarlane.

Mark Wahlberg has previously said this about the plot to Ted:

I don’t know how much [Seth] wants me to tell but it’s about this kid who gets a bear for Christmas. And, you know, it’s the ’70s — it’s one of those Teddy Ruxpin-ish teddy bears where you squeeze it and it says, ‘I love you!’ The kid wishes and dreams that the bear would come alive — and a Christmas wish must be granted — and it does [come alive].

Seth MacFarlane’s voicing the bear — the bear is gonna look like a little teddy bear, but it’s motion-capture. It’s like ‘Avatar.’ It’s never been done before. It’s insane — I mean, what the bear does…. The bear becomes famous, and that’s my ticket to getting things and living a life of privilege.

I like Seth MacFarlane and his comedy stylings, so I’ll probably give this a look.  I’ll keep my expectations low, however. 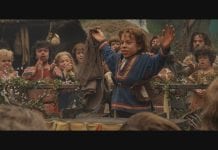