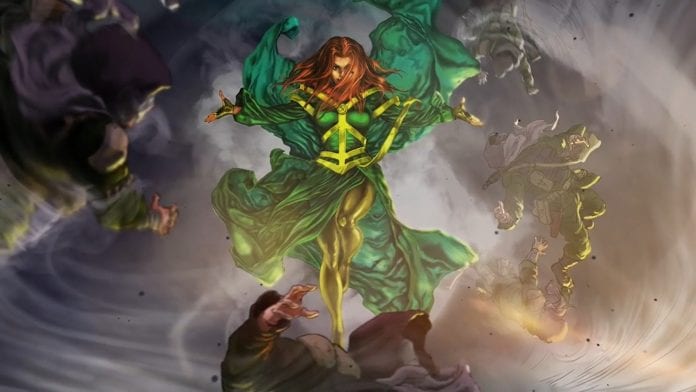 The upcoming Black Adam film has added another member to the cast as Quintessa Swindell will portray the JSA hero, Cyclone!

As we learned earlier this year during DC Fandome, Black Adam will bring in a number of other DC characters beyond Dwayne Johnson’s titular character. With Aldis Hodge signed on to be Hawkman and Noah Centineo set to play Atom Smasher, the cast is really filling out. Today, THR reports that Quintessa Swindell has signed on to play Cyclone (aka Maxine Hunkel) in the film. The Rock himself confirmed the news a short time later, also letting us know that filming is set to kick off this Spring.

Ready to rumble⚡️💪🏾
A pleasure to officially welcome, Quintessa Swindell to our BLACK ADAM cast.
They’ll be taking on the role of CYCLONE.
Can’t wait to work with them and we ready to rumble in the DC jungle. #bringit#cyclone🌪 #blackadam⚡️
Production starts spring 2021 pic.twitter.com/kIlHkZBmgh

In the comics Cyclone is the granddaughter of the original Red Tornado and a member of the Justice Society of America. It’ll be interesting to see if that origin will stay the same in the film, and how the character will play into the film itself.

What do you think about having Swindell portray Cyclone in the film? Their roles in Euphoria and Trinkets shows they have some serious talent and I’m eager to see them come to the superhero realm.

Black Adam was previously set to launch around Christmas time next year, but has since been pulled from the schedule after WB’s most recent release date shuffle. Hopefully we’ll get an updated release time as we inch closer to filming kicking off.