THR got this scoop but for now I’m going to continue to list it as a rumor.  Since this news comes from their ‘trusted sources’ it’s not technically official.  I will say that I’m willing to believe it, though I’m not exactly sure how to feel about it yet.  Apparently after filming the two-movie adaptation of The Hobbit, Peter Jackson had a lot of extra footage.  As in more than he’d even need for his likely extended editions of the films. 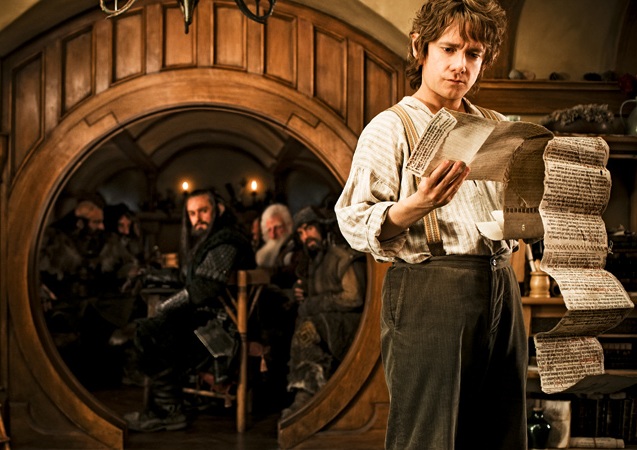 Because of all this extra footage, Jackson teased the idea of making a third film, with it, which would require a couple months more of shooting (which would have to take place next Summer according to the source).  It seems as though Warner Bros. is keen on the idea, which isn’t surprsing considering that it’s a multi-million dollar franchise, and another film is sure to make bank.

Sources are claiming that the studios are currently trying to figure out the logistics of turning the duology, that already has firm release dates, into a trilogy.  It would mean inking new deals with all of the actors, as well as the behind the scenes people.  If you’re not familiar with all the workings of a studio, all of that stuff can be a major headache to get worked out.  But it’s not just about the money and bringing people back, they’ll have to re-work the story in order to accomodate a third film.  That means script re-working and possibly some changes in the editing bay (more on the second film than the first).  Either way, they need to work fast, and a person close to the production says:

“If we’re going to do it, we have to make a decision soon…It’s strongly driven by the filmmakers’ desire to tell more of the story.”

So if it’s going to happen, at least we won’t have to wait terribly long for official word on it.  A decision will have to be made soon, with all of the extra work they’re going to have to do, so for now, just sit, wait, and try to discern what you think of it.  While I love the idea of more time being spent in Peter Jackson’s Middle-Earth, and just don’t know what they’re going to do with it.  I was already iffy on the idea of stretching the one book into two films, but now three?  Hard to say.

What do you guys think about this?