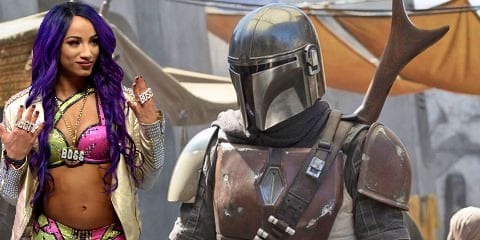 Looks like it may be “Boss Time” in a galaxy far far away, as rumors have begun to swirl that the Legit Boss Sasha Banks is going to be on The Mandalorian.

According to Mat Men Pro Wrestling, Sasha Banks will be in the next season of The Mandalorian. They first reported this via twitter, which you can see below.

Here is another interesting tidbit we were told by the same person but I can not 100% confirm it.

Sasha Banks will be in season 2 of The Mandalorian #Mandalorian #SashaBanks pic.twitter.com/3KUhuRyxEd

Now there is nothing backing this up, and no confirmation other than their tweet, and no word on who she would play if she is in deed in the show. The Rumor has even gone so far as to say she has already shot scenes for the show. Sasha has been off WWE TV since Jan 3rd with an ankle injury, with no word on when she will return, so it is possible that she has.

Production on season 2 of The Mandalorian is underway, so perhaps it is only a matter of time until we know if this is true or not. Stay tuned to Cinelinx as more develops.