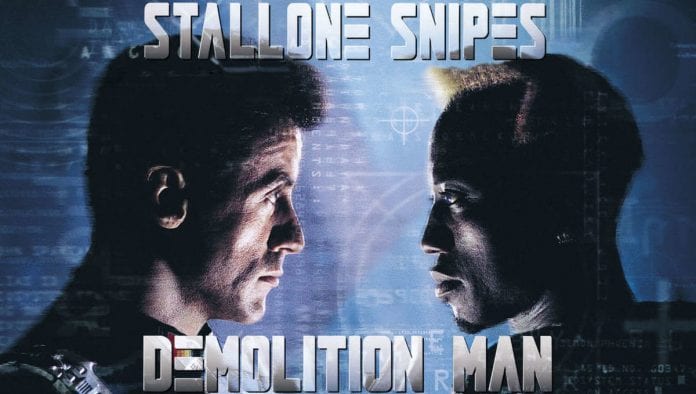 After 27 years, LAPD Sgt. John Spartan is being unfrozen again for a Demolition Man sequel. That’s according to the star himself, Sylvester Stallone, who took to his personal instagram for a Q&A. 5:47 into the video, he revealed that a Demolition Man sequel is in the works with Warner Bros. and it’s looking “fantastic”.

Demolition Man starts in the year 1996 with LAPD Sgt. John Spartan trying to apprehend the psychotic criminal Simon Phoenix (Wesley Snipes) and save the people Phoenix has taken hostage. After thermal scans suggest there aren’t any hostages, Spartan carries out an unauthorized strike on the building, Phoenix blows up the area the hostages are supposedly being kept.

The dead bodies found in this building cause Spartan to be incarcerated alongside Phoenix in the “California Cryo-Penitentiary”. Spartan is sentenced to 70 years of cryogenic prison, whereas Phoenix’s sentence is eternity. During this time, scientists are supposed to reprogram the brain to remove any violent tendencies. When Phoenix breaks out in the year 2032, the crime-free society is unable to handle his mischief. It causes them to defrost Spartan (a.k.a. The Demolition Man) to save the day.

Sylvester Stallone didn’t go into any specifics. He only said a Demolition Man sequel is happening. He also confirmed that the film Hunters is being made, which has been 20 years in the making. The actor even revealed that Nighthawks is being remade into a streaming service series. That’s a lot of Sly Stallone on the way!

As more news is revealed on this sequel and all other projects from one of the greatest action heroes of all time is made available, we’ll have it here.