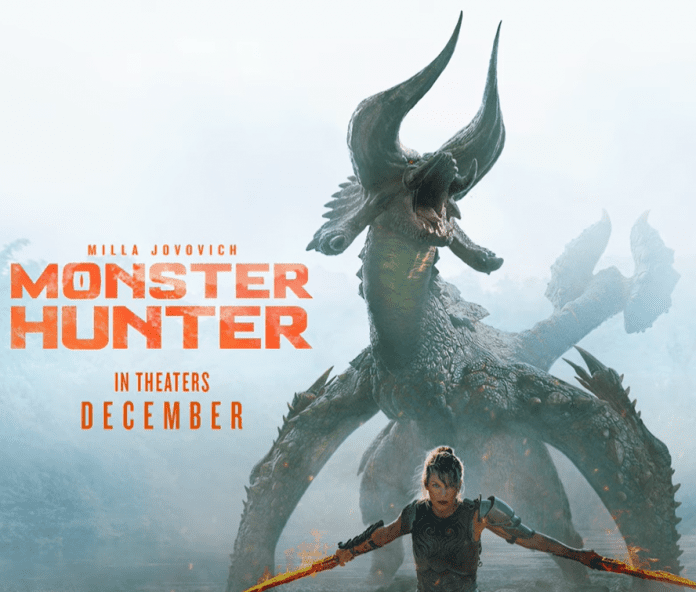 At long last, we finally have our first look at the upcoming Monster Hunter film. It has felt like decades since it was first announced that Sony Pictures would be developing a film adaptation of Capcom‘s insanely popular IP, Monster Hunter.

After that long wait, Sony has just revealed the first official trailer for Monster Hunter.

Behind our world, there is another: a world of dangerous and powerful monsters that rule their domain with deadly ferocity. When an unexpected sandstorm transports Captain Artemis (Milla Jovovich) and her unit (TI Harris, Meagan Good, Diego Boneta) to a new world, the soldiers are shocked to discover that this hostile and unknown environment is home to enormous and terrifying monsters immune to their firepower. In their desperate battle for survival, the unit encounters the mysterious Hunter (Tony Jaa), whose unique skills allow him to stay one step ahead of the powerful creatures. As Artemis and Hunter slowly build trust, she discovers that he is part of a team led by the Admiral (Ron Perlman). Facing a danger so great it could threaten to destroy their world, the brave warriors combine their unique abilities to band together for the ultimate showdown.

As is the case with every movie studio in 2020, Sony has had a tough time nailing down a firm release date for Monster Hunter. At the beginning of the year, the film was set to release on September 4, 2020. However, it was delayed back in July to April 2021, only to be pushed forward to its current release date of December 30, 2020.

It appears as if Sony has finally settled on a date for Monster Hunter, if this trailer is any indication. Prior to the initial 2020 date shift, Sony had yet to do any marketing for the film. This is at least a nice start.

You can check out all of the major films still set for release in 2020 in our 2020 Movie Schedule.