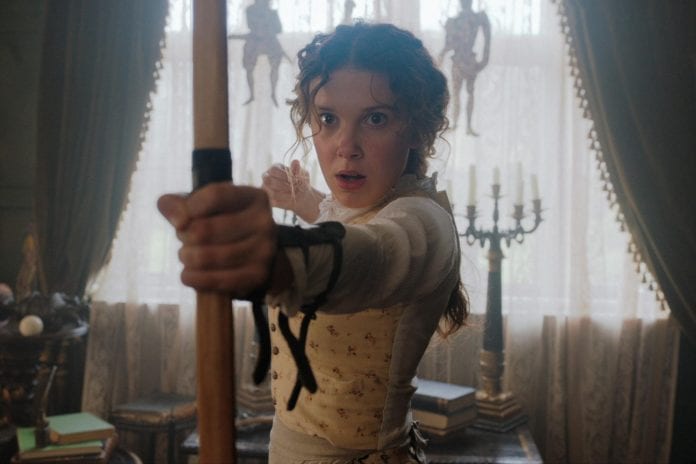 At last, the full length trailer for the long-teased Netflix film Enola Holmes has arrived (and it is incredible!)

Based on the book series by Nancy Springer, Enola Holmes follows the titular character, the teenage sister of Sherlock Holmes, as she searches London for her missing mother. The film stars Millie Bobby Brown as Enola, while Henry Cavill has been cast as the great detective himself, with Sam Claflin completing the trifecta as Mycroft Holmes. This story has generated great amounts of interest ever since it was announced, and judging from this trailer, all of the hype is absolutely justified because, well, just watch and you’ll see:

Not only does Millie Bobby Brown look amazing in this trailer, in a role that could completely redefine her career I might add, but to my delighted surprise Henry Cavill looks to have the makings of an excellent Holmes (not the easiest role to pull off). I admit to not being keen on Netflix films in the past, but this looks like it will be nothing short of amazing and I hope this leads to more film adaptations in the future (a distinct possibility as there are six books in the series to date).

England, 1884 – a world on the brink of change. On the morning of her 16th birthday, Enola Holmes (Millie Bobby Brown) wakes to find that her mother (Helena Bonham Carter) has disappeared, leaving behind an odd assortment of gifts but no apparent clue as to where she’s gone or why. After a free-spirited childhood, Enola suddenly finds herself under the care of her brothers Sherlock (Henry Cavill) and Mycroft (Sam Claflin), both set on sending her away to a finishing school for “proper” young ladies. Refusing to follow their wishes, Enola escapes to search for her mother in London. But when her journey finds her entangled in a mystery surrounding a young runaway Lord (Louis Partridge), Enola becomes a super-sleuth in her own right, outwitting her famous brother as she unravels a conspiracy that threatens to set back the course of history. Based on the beloved book series by Nancy Springer, ENOLA HOLMES is a dynamic new mystery-adventure that introduces the world’s greatest detective to his fiercest competition yet: his teenage sister. The game is afoot.

Enola Holmes arrives on Netflix on September 23, 2020 and I for one am greatly looking forward to it.