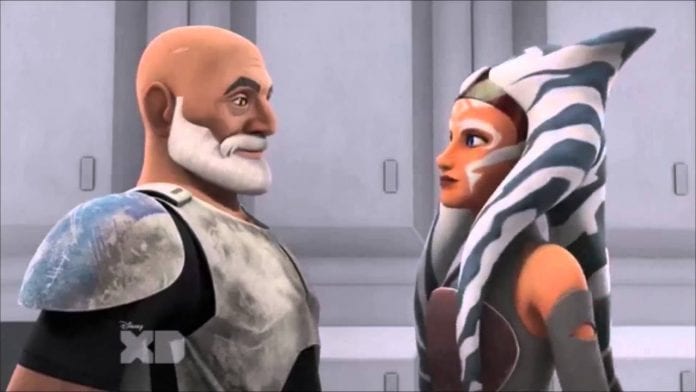 Dave Filoni appears to be hinting that Ahsoka might not be the only Clone Wars character to appear in season 2 of The Mandalorian. Keep reading for details!

When news broke earlier this month that fan-favorite Ahsoka Tano would likely be appearing in The Mandalorian, it whipped Star Wars fans everywhere into a frenzy of excitement. But now it appears that Ahsoka might not be coming alone, as Dave Filoni, the executive producer on the series, has posted what appears to be a piece of concept art such as what appeared in the end credits in The Mandalorian’s first season:

Judging by the twin humps in the hood, the figure on the left is clearly Ahsoka (as she has a near identical appearance at the conclusion of Star Wars: Rebels), while the figure on the right is what has everyone talking. That figure bears a suspicious resemblance to Captain Rex, formerly a member of the clone army during the Clone Wars. Not only is this possible, as the character was revisited during Rebels, it is also likely as the character was effectively retconned into Return of the Jedi a few years earlier.

Ahsoka and Rex have been good friends for many years by the last time the two are known to have met (during Rebels), so it makes all the sense in the world that their adventures would continue post-ROTJ. Assuming Filoni posting this art means what we think it does, the question then becomes who is being cast to play Rex in live-action? There are any number of possibilities, and it will be exciting to see who plays this role (assuming Rex’s appearance is confirmed).

What do you think? Is Captain Rex going to make an appearance alongside Ahsoka when The Mandalorian returns? Let us know what you think in the comments and stay tuned for more news as this story develops.

The Mandalorian will return for season 2 in October 2020.