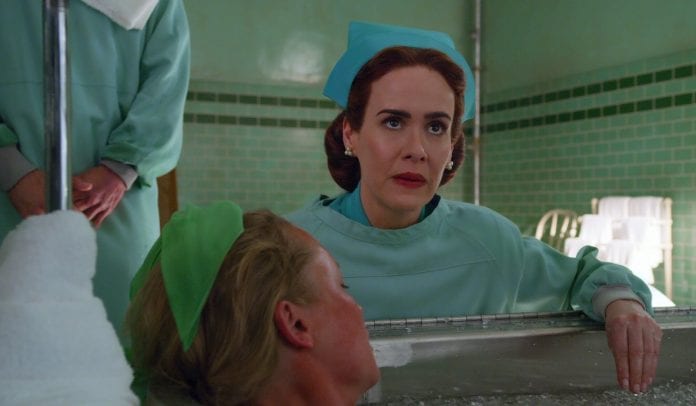 To be honest, I can’t say I ever needed an origin story for Nurse Ratched, the tyrannical antagonist in One Flew Over the Cuckoo’s Nest. I’m still not sure I need it, but I can say that this first trailer for Ratched, the upcoming prequel series from Netflix, is pretty damn great:

There’s a lot to unpack in this trailer. From the various residents it seems she’ll be dealing with, to the horrible looking experiments going on in that asylum, and even her own sense of darkness (which Paulson portrays so well). I’m definitely digging the vibe from this trailer and am certainly more intrigued than I was before. From Ryan Murphy and Ian Brennan, RATCHED is a suspenseful drama series that tells the origin story of asylum nurse Mildred Ratched. In 1947, Mildred arrives in Northern California to seek employment at a leading psychiatric hospital where new and unsettling experiments have begun on the human mind. On a clandestine mission, Mildred presents herself as the perfect image of what a dedicated nurse should be, but the wheels are always turning and as she begins to infiltrate the mental health care system and those within it, Mildred’s stylish exterior belies a growing darkness that has long been smoldering within, revealing that true monsters are made, not born.