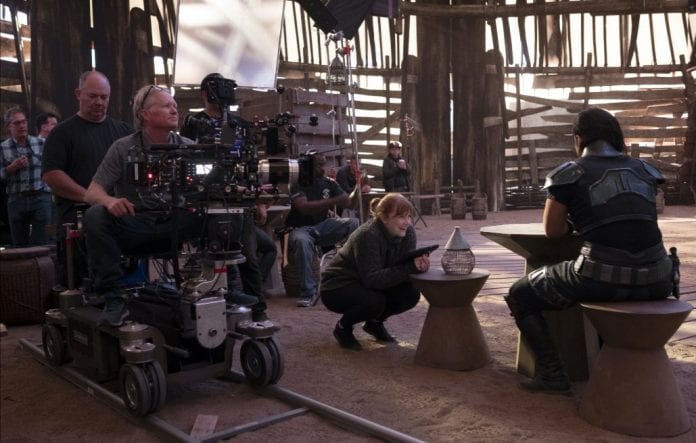 Disney Gallery takes us behind the scenes of The Mandalorian and manages to be both insightful and touching. We discuss the promising debut episodes.

While we still have a little bit to wait for Season 2 of The Mandalorian, Disney/Lucasfilm have given Star Wars fans something to help ease the wait. Kicking off on May the 4th, Disney Plus will premiere the first episode of Disney Gallery: The Mandalorian, a new making of docuseries. I had the pleasure of checking out a couple episodes from the 8-part series and am here to tell you: it’s most definitely worth checking out. If you hadn’t picked up on it beforehand, through my recaps of the series as it released last year, I really liked The Mandalorian. Being the first live-action Star Wars show, I wasn’t sure what to expect, and it managed to blow me away (as it did so many fans). They managed to weave together a story that integrated our favorite elements of the franchise, while still delivering something fresh with that movie quality feel.

It remains an impressive feat, and while we eagerly await the return of our beloved Yoda-baby to the streaming service, it’s a great time to take a deeper dive into how this ambitious series came together. That’s where Disney Gallery steps in, offering fans a look behind the cameras and magic that helped bring this new story to life in half-hour chunks. While some great articles have been released since the show’s debut showing off some of the virtual magic used to create the show, Disney Gallery promises to go a little bit deeper. While the episodes I had the chance to watch didn’t hit on those technical elements, what I saw was nonetheless enchanting.

The premier episode puts the focus on the directors for the first season (Dave Filoni, Bryce Dallas Howard, Rick Famuyiwa, Deborah Chow, and Taika Waititi), giving each of them a little spotlight as they discuss the work they did on their episodes. As they discuss their individual approaches to telling stories in a galaxy far, far away we’re treated to oodles of behind the scenes footage showing them working with the actors on the set, and guiding the action. Through this we can grasp not only the immensity of the task they had in developing the series, but in how they were able to create such a cohesive story while still bringing their individual details to the fore on their episodes. Of course, they go into some of the quirks and unique problems they faced and the experiences they brought into the project and how their backgrounds influenced the decisions they made.

What surprised me most while watching, was the amount of cooperation between the directors for the season. This episode made it abundantly clear that this show was treated as an overall effort between everyone. The behind the scenes footage showcased many of the directors on the set at the same time for a variety of episodes, sharing thoughts and ideas even as one was more in charge of the specific episode. It was really neat to see that level of engagement and dedication from all of them and it goes a long way towards showing how much everyone working on this series truly loved the experience. While Taika Waititi only directed the show’s finale, he’s present on many of the sets throughout the series and it’s obvious how much fun he’s having (they all seemed to have had a BLAST).

The second episode delves more into the overall legacy of Star Wars, the creatives’ thoughts on what Star Wars means, and how they tried to infuse that into The Mandalorian. Here, we expand beyond the directors and get to hear from some of the cast, members of the VFX team at ILM, and even Lucasfilm President, Kathleen Kennedy.

What’s cool about this episode is that the focus isn’t just on The Mandalorian (though we are treated to even more behind the scenes footage), but on Star Wars in general. So we get some fun stories about work on the older films on top of some fun old-school footage. It highlights how the central themes of Star Wars are so timeless and why they continue to resonate with audiences and new generations.

It gives the creators a chance to geek out and it’s easy to see the passion they have for this franchise. It made me appreciate the work they put into the show all the more. While I would have been more than happy to get any basic behind the scenes documentary, I really loved how this series is presented. It’s not a straight up doc, with a bunch of talking heads and footage. Instead, it’s presented more as a roundtable discussion where the cast and crew gather to talk. It’s not a direct Q&A, but rather we see series creator Jon Favreau throw out some ideas and questions while encouraging them to share their thoughts/stories.

It’s a great format and makes the show flow in a natural way while still highlighting important aspects of the filmmaking process. It takes the series from being a simple cut and dry BTS documentary (something akin to what you’d see as a home entertainment featurette) and elevates it. The result is a series that’s not only insightful to the process and the show, but a show that manages to be engaging on its own and separate from the source. My only hope is that as the series continues it continues to dive deeper into some of the technical aspects, as well as highlighting some of the other crew members who don’t normally get the spotlight on these types of things. With eight episodes, there’s nothing but potential with this Making of docuseries. Based on what I’ve seen so far it’s on the right track for one of the best behind the scenes Star Wars docs we’ve been treated to. In fact, I’m hoping this “Disney Gallery” series will extend to other original shows/movies from Disney.

Disney Gallery: The Mandalorian premieres on Monday, May 4th with new episodes following every Friday after.