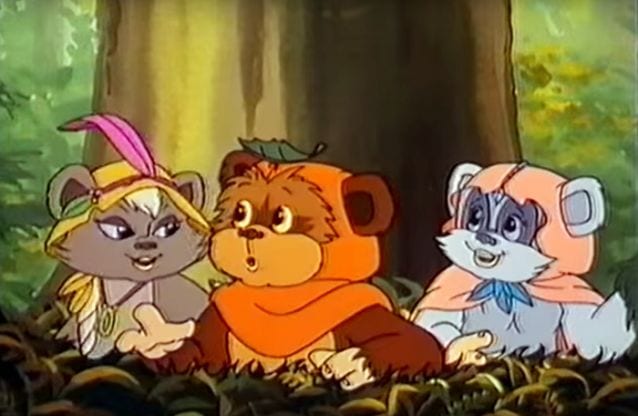 Star Wars fans have even more to look forward to on Disney Plus next month as the classic Ewok cartoons, TV movies, and more come to the service!

Well this is a pleasant, and somewhat unexpected, surprise! Disney Plus offered up a look at what’s coming to the streaming service next month and it includes some old-school Star Wars media to enjoy. Starting on April 2nd fans will be able to stream these:

Ewoks: The Battle for Endor

So yeah, the old made-for-TV Ewok movies, the animated Ewok cartoon series, and even the original Genndy Tartakovsky Clone Wars micro-series! The only thing notably missing is the old Droids cartoon (which aired in 1985 around the same time as Ewoks), though I suspect we’ll see that added on before too long as well.

Considering many of these have been very difficult to watch (even the DVDs have can be tough to track down) and their stories are now considered “Legends,” it’s an exciting treat for many who may have watched them while younger, but haven’t been able to revisit. That’s not to mention the amount of fans who will get the chance to watch them for the first time!

Coincidentally, this seemingly lines up with a small tidbit of information I’d heard just the other day. I largely brushed it off, and only passingly put out feelers for more, but considering today’s news, seems more likely than ever before.

Sure looks like Star Wars Detours, the animated show that had roughly two seasons COMPLETE but never aired, might finally see the light of day. I heard that recently others have been seeing mention of the show pop up, something that hasn’t happened in years, which could indicate they’re moving forward with some sort of plan to release them.

The move to put all these non-canonical stories on the service seem indicative they’re more willing to put that type of content out there as opposed to continuing to sit on it. Hopefully we’ll hear more on that soon. In the meantime, which of these are you most excited to watch next month first?