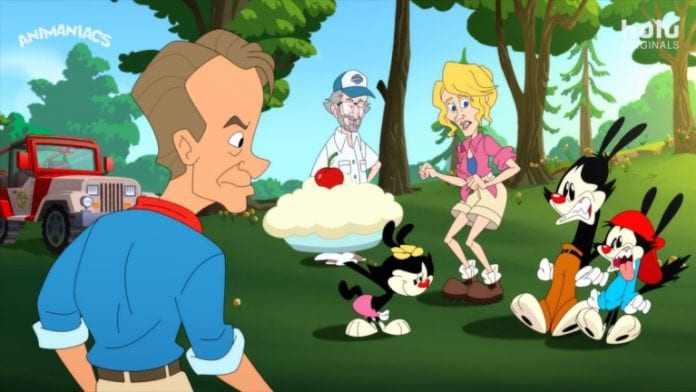 Over the weekend, during a virtual NYCC presentation, Hulu offered a clip from their upcoming Animaniacs revival and it’s amazing.

During a panel for NYCC Metaverse, Hulu gave fans their first look at the return of the Animaniacs. Using a play on a classic moment from Jurassic Park (part of the fun of the show was how directly it poked fun at Steven Spielberg) the Warner Brothers, and Sister, make a triumphant return announcement:

As someone who grew up with this show as a kid, I’m blown away by how much this FEELS just like the original. Not just because the original voice cast (Rob Paulsen, Jess Harnell, and Tress MacNeille) have returned either. It’s almost as if no time has pastand brings the irreverent humor back in trademark style. Aside from a sharper image, it looks like older fans are in for a treat when it returns.

Hulu, Amblin Television, and Warner Bros. Animation are proud to unveil a brand-new version of the iconic family-friendly cartoon series for the whole family, as the Warner siblings, Yakko and Wakko, and the Warner sister Dot, have a great time wreaking havoc and mayhem in the lives of everyone they meet. After returning to their beloved home, the Warner Bros. Water Tower, the Animaniacs waste no time in causing chaos and comic confusion as they run loose through the studio and beyond, turning the world into their personal playground. Joining Yakko, Wakko, and Dot, fan-favorite characters Pinky and the Brain will also return to continue their quest for world domination in each of the 13 episodes.