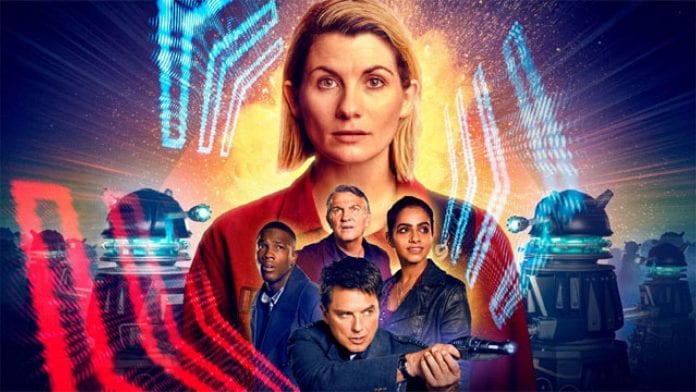 The trailer for Doctor Who: Revolution of the Daleks, this year’s annual Doctor Who special, has arrived, promising plenty of Doctor Who adventures, plus the return of a fan-favorite character!

Most years, Doctor Who will have a special Christmas-time episode to entertain fans during the holiday season. While this year’s episode is actually arriving on New Year’s Day 2021, the adventures appear to be no less exciting, not least because this episode is titled Revolution of the Daleks, meaning one of the Doctor’s most famous opponents will be front and center.

But that’s not all, this trailer also features the return of a fan favorite character, one beloved ever since the series returned in 2005: Captain Jack Harkness (played by the one and only John Barrowman) is back!

Check out the action in the newly released trailer below:

As you can see, this episode picks up where the previous series left off, with the Doctor locked up in space prison and her companions attempting to rescue her and the save the Earth at the same time (it’s Doctor Who so this is just a matter of course). Enter Jack Harkness, looking just as charming as ever. Harkness hasn’t been seen in an episode of Doctor Who (his recent cameo last year notwithstanding) since 2010, so it will be so much fun to see how Jack gets on with the 13th Doctor and her companions. I truly hope this won’t be the last we see of the cheeky immortal.

And then there’s the Daleks. They’ve been given a design upgrade since the last time we saw them, but are still recognizable as one of the Doctor’s most deadly enemies. How they’re on Earth is left unexplained, but I was very interested to see the return of Robertson (Chris Noth), a Trump-like character that appeared in “Arachnids in the UK” in the eleventh series. Robertson appears to be affiliated with the Daleks in this episode (perhaps unwittingly), and given he infamously escaped any consequences in his debut appearance, I can’t help but wonder if the Daleks will finally give Robertson his long overdue comeuppance (one can dream anyway).

Doctor Who: Revolution of the Daleks appears to have all the makings of a classic Doctor Who adventure, with Daleks and Jack Harkness in the mix, I really can’t see how this story can go wrong. Best of all, we don’t have too much longer to wait and see it, as New Year’s Day is growing ever closer.

Doctor Who: Revolution of the Daleks will air on New Year’s Day 2021