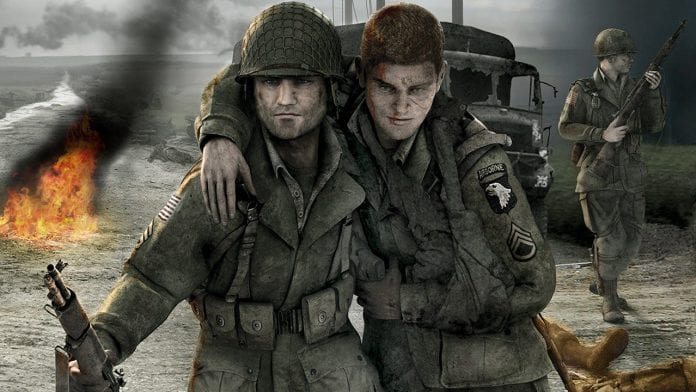 A TV series based on Gearbox Software‘s Brothers in Arms video game series is currently in the works. Gearbox’s entertainment division announced the news in a press release, today. In it, the entertainment company also made the hiring of The Shield‘s Scott Rosenbaum as showrunner public.

“Scott is an incredible talent. I have tremendous respect for him as a writer and a showrunner and am thrilled for him to be a part of this project,” said Gearbox Entertainment Company co-founder and series producer Randy Pitchford. “Scott will create more than a war show – we’ll all be on the edge of our seats as this series will be a surprising and heartfelt emotional journey that resonates across generations with brotherhood as the theme that reconciles and connects humanity.”

The Brothers in Arms TV series is said to explore previously classified World War II (WWII) stories. The first season will reveal the biggest scandal of WWII, one which miraculously was kept secret for 40 years. All of which is based on true events.

Newly hired showrunner, Scott Rosenbaum, is a 20-year veteran of the small screen, having worked on several shows such as Queen of the South, ABC’s V, and most notably FX’s award-winning series The Shield.

“I’m honored to be joining the frontlines of this project and look forward to creating an emotional experience around a title that means so much to the Gearbox community,” said Rosenbaum. “What attracted me to this series was that while it’s effectively a show about war, the series is really about the incredible stories of the ordinary men and women, from the soldiers, resistance groups, to local civilians who are confronted and overcame impossibly difficult, extraordinary situations. In addition, it’s incredibly exciting to be able to bring these previously classified, unknown stories to an audience, stories that an audience is going to be quite frankly shocked they hadn’t heard before.”

The Brothers in Arms series began in 2005 with Brothers in Arms: Road to Hill 30. It received overall positive reviews, upon release. However, history has not been kind to the war-time series. Scoring mixed reviews from critics and fans in various sequels that followed, the video game series has been dormant since 2014. It appears now that Gearbox is trying to milk something out of it. This time in the form of a television series.

Despite the release of Borderlands 3 to overwhelming success, Gearbox Software and its CEO Randy Pitchford have had their fair share of scandals and criticism, as of late. Most recently, it was reported by Jason Schreier (formerly) of Kotaku that the studio failed to pay their developers the full six-figure royalty-based bonuses they were promised, due to the high cost to produce the game.

The Brothers in Arms TV series has not been purchased by any network or streaming service, as of yet. Furthermore, there’s been no word if all those attached to the TV series project will be paid under a similar royalty-based contract.