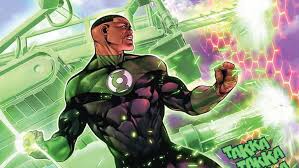 We have been waiting for more information on the upcoming Greg Berlanti produced GREEN LANTERN series for HBO Max. Information more specifically as to which members of the Green Lantern corp, who would be starring in the series, plot and so much more. Thanks to the current Television Critics Association winter press tour we are not beginning to have some of the answers fall into place.

HBO Max’s head of originals, Sarah Aubrey, laid out a few details as to what the show in itself would be about. Aubrey says that the series “will span several decades and focus on origin stories and two major Green Lanterns on Earth.” It was also mentioned that it will feature Sinestro, a popular Green Lantern villain.

During the Television Critics Association press tour on Wednesday, Aubrey said they are in the “early stages of talking to him about.” She continued that it “will span several decades and focus on origin stories of two major Green Lanterns on earth.” She added it will also feature Sinestro, a major villain from the comics.

Sinestro is a former member of the Green Lantern corp. who eventually turns evil. He was played by Mark Strong in the 2009 DC movie that starred Ryan Reynolds as Hal Jordan. Now the question which as of right now is up to interpretation is which Green Lantern members will be the focus.

There are many fans who would not mind seeing another iteration of Hal Jordan, possibly Jessica Cruz, Guy Gardner, Kyle Rayner and potentially John Stewart. Stewart has been a hot subject for many fans of Berlanti’s Arrowverse on the CW. The reason being many have been hoping to see John Diggle played by David Ramsey pick up the ring and become the guardian of Earth.

There have been many potential clues or Easter Eggs as to whether or not Diggle actually is John Stewart. clues such as his stepfather, Gen. Roy Stewart (played by Ernie Hudson) who was introduced in ARROW. Along with a reference in which Barry Allen from Earth-90 (played by John Wesley Shipp) looks at Diggle and mentions he does not have in ring on in the ELSEWORLDS crossover event.

Stay tuned for more information about this show as it develops.