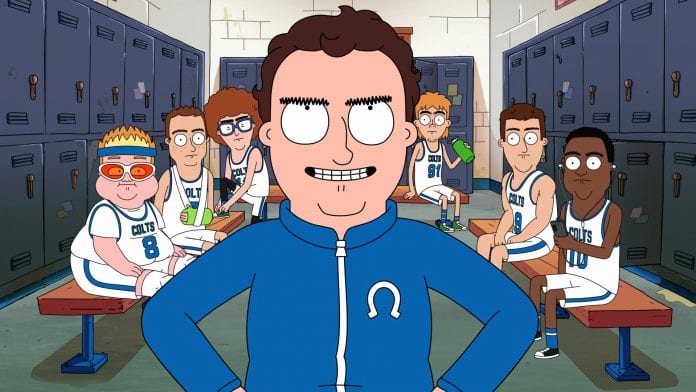 Today brings our first look at the upcoming Netflix animated series, Hoops, introducing us to the foul-mouthed coach we’ll see more of next month!

To be honest, Hoops hadn’t been on my radar until today, but now that I’ve seen the trailer, I’m very eager to get my eyes on this new series when it drops on August 21st:

I love the team behind it, with Phil Lord and Chris Miller along with Ben Hoffman (Archer). That’s not to mention some impressive talent in the voice cast as well: Jake Johnson as Coach Ben Hopkins: A pathetic, angry, foul-mouthed coach desperate to prove himself, but always looking for an easy way to get the job done. He’s shameless and selfish, and given the opportunity to do the right thing, he fails most of the time.

Rob Riggle as Barry Hopkins: Ben’s father. A former pro athlete turned steakhouse owner. Barry frequently rips his son, and doesn’t respect him, but still wants the best for him.

Natasha Leggero as Shannon: Ben’s estranged wife. She’s got a history of impulsive behavior and rash decisions, but has straightened up her life since leaving Ben and is focused on making her horse farm a success.

Cleo King as Opal: Ben’s boss and Principal of Lenwood High who doesn’t like her job and is nearly as foul-mouthed as Ben. She’s unlucky in love, superstitious and has a talent for singing.

A.D. Miles as Matty: 16 year old seven-footer whose father abandoned him when he was young. Matty struggles with his body off the court and has a hard time making friends.

To learn more about Hoops be sure to hit up the official site, and tune in Sunday for it’s [email protected] panel.