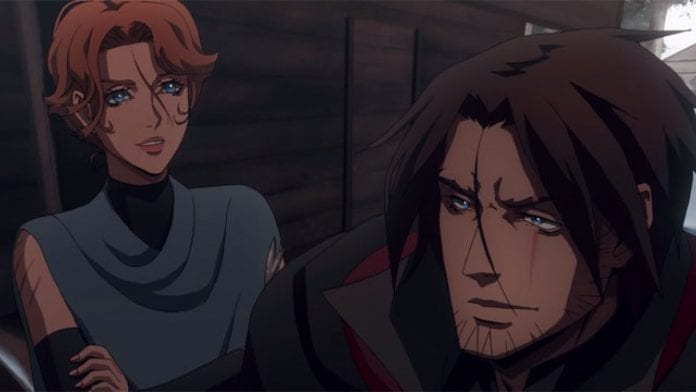 Netflix has followed up announcing the premiere of season 3 of Castlevania with a full trailer teasing what is to come in the new season!

It’s actually not that surprising that Netflix has revealed the full trailer for Castlevania season 3. Once the release date was revealed for the new season, a trailer seemed like the logical next step. And what a trailer it is! The story hinted at in this amazing trailer makes it perfectly clear that evil is far from being destroyed in the wake of Dracula’s demise.

The trailer, quite frankly, look stunning. It promises, action, lots of violence, and a certain amount of intrigue. Season 3 of Castlevania will definitely be bloody as well, though that’s hardly surprising given the subject matter. One thing is for sure, fans of the anime will be thrilled with this new season once it arrives on March 5.

Here’s the official synopsis for season 3:

Trevor Belmont, last survivor of his house, is no longer alone, and he and his misfit comrades race to find a way to save humanity from extinction at the hands of the grief-maddened Dracula and his sinister vampire war council.

But wait, isn’t Dracula dead as of the end of season 2? Only time will tell how Dracula comes to be involved in the events of the new season, and there’s not that much longer to wait.

The third season of Castlevania will premiere on Netflix on March 5, 2020.