HBO brought a brand new trailer for their upcoming Watchmen TV series to SDCC and it’s all kinds of amazing. Come inside to watch!

A couple months ago, we got our first look at HBO’s new Watchmen series, but Comic-Con has delivered a lengthier, and super impressive new trailer for fans of the comic:

There’s a LOT to unpack here, but it does a pretty stellar job of giving a better idea of the show’s new story. It won’t be a retelling of the comic, but definitely plays within that world and features some of the iconic characters.

On top of the trailer a few more details on the show were announced, including that the first season will consist of eight, one-hour episodes. Based on what we see here, we’re definitely in for quite a treat…

Watchmen will hit HBO this October. Just in time to get your own mask. 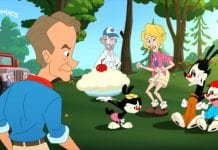