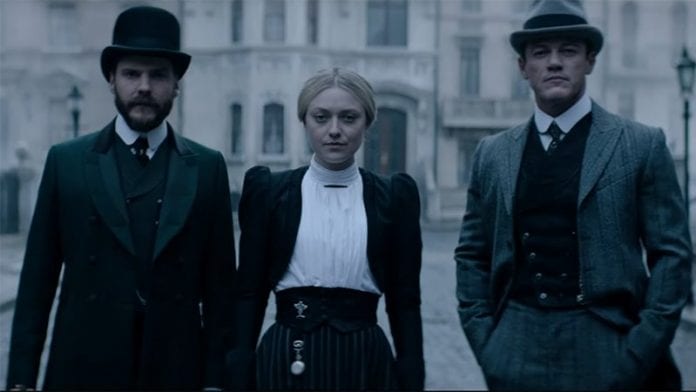 Two years after audiences were plunged into the strange world of The Alienist, the adventure is set to continue as we get our first official look at The Alienist: Angel of Darkness, set to premiere on TNT on July 26, 2020.

Like The Alienist before it, The Alienist: Angel of Darkness is also based on one of Caleb Carr’s novels and serves as a follow up to the events of The Alienist. The three principal actors, Daniel Brühl, Luke Evans, and Dakota Fanning are all returning to reprise their roles, and judging from the official trailer the stakes have never been higher.

As with the original series, The Alienist: Angel of Darkness looks poised to draw the curtain back on the more unpleasant aspects of life in New York City in the late 19th century. While the first season focused on the trio hunting down a psychotic serial killer of young boys, this season sees the investigators looking for someone who is stealing infants. And as one might expect, especially if you’ve watched the original season, danger lurks around every corner for all participants, particularly Sara. It looks like this season won’t hesitate to dive headfirst into some very uncomfortable issues.

Having opened her private detective agency, Sara (Dakota Fanning) reunites with Dr. Kreizler (Daniel Brühl), the formidable alienist, and John Moore (Luke Evans), now a New York Times reporter, to find the Spanish Consular’s kidnapped infant daughter. Their investigation leads them down a sinister path of murder and deceit, heading towards a dangerous and elusive killer. The series shines a light on the provocative issues of the era – the corruption of institutions, income inequality, yellow press sensationalism, and the role of women in society.

The Alienist: Angel of Darkness will premiere on TNT on July 26, 2020.