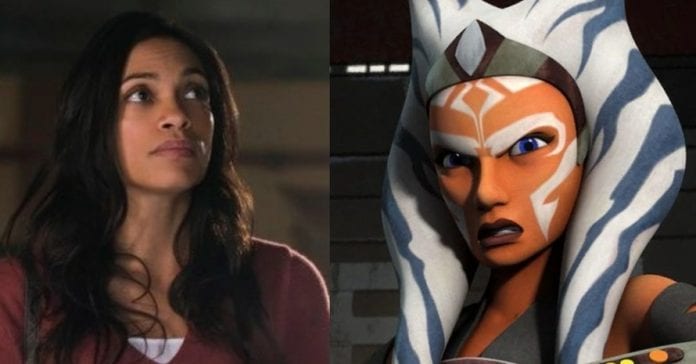 In an earth-shattering development, it’s been learned that Rosario Dawson has reportedly been cast as the fan-favorite character Ahsoka Tano for the second season of The Mandalorian!!

Ahsoka Tano, the former padawan of Anakin Skywalker, has been a fan favorite of the Star Wars community for many years, so much so that many fans have demanded she make the leap from animation to live action. Disney played coy with these demands for a long time, but now it seems they’re finally listening because Slashfilm.com is breaking exclusive news that Rosario Dawson (a fan favorite casting option) has been reportedly cast to play Ahsoka Tano in the upcoming second season of The Mandalorian.

Assuming this proves to be 100% true, this would be a mind-blowing development. For one, Ahsoka has never been seen in a live-action setting. And for another, we have no idea where Ahsoka has been since the events of Return of the Jedi. The last we saw of her (immediately post-ROTJ), Ahsoka was leaving with Sabine to search for Ezra Bridger. Would Ahsoka appearing in The Mandalorian include an appearance from Sabine? Will we get an update on her search? There are so many places Disney could go with a live-action Ahsoka and all of them are incredibly exciting to contemplate.

Personally, I think an Ahsoka appearance in The Mandalorian would directly connect to Moff Gideon having the Darksaber, especially if she’s still traveling with Sabine (a former wielder of the Darksaber).

Hopefully Disney will soon confirm this news and we’ll all have a reason to be even more excited to watch season 2 of The Mandalorian, currently scheduled to premiere in    October 2020.