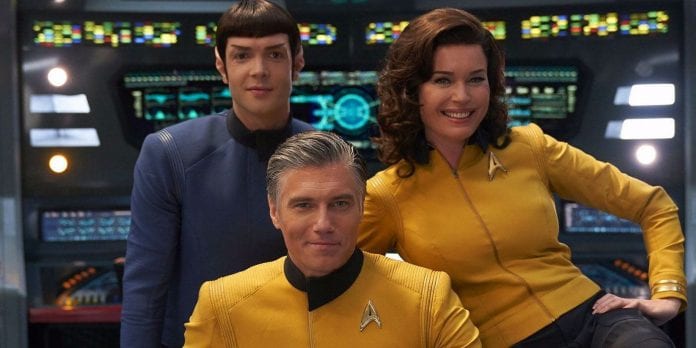 CBS All Access set to bring another Star Trek series to the streaming platform, filled with familiar faces.

The show will be the spinoff that Star Trek Discovery fans have been asking for since season 2 of Star Trek: Discovery. It is called Star Trek: Strange New Worlds, and will star Anson Mount, Rebecca Romijin, and Ethan Peck as Captain Pike, Number One, and Spock as they explore new worlds around the Galaxy.

This is the 5th Trek series in recent years, and will be set a decade before Kirk. Strange New Worlds has been given a series order, with a premiere written by Akiva Goldsman with the story by Alex Kurtzman, Jenny Lumet, and Goldsman. Speaking on the project, Goldsman said:

“This is a dream come true, literally, I have imagined myself on the bridge of the Enterprise since the early 1970s. I’m honored to be a part of this continuing journey along with Alex, Henry and the fine folks at CBS.”

Pike, Number One, and Spock have had a huge following ever since their debut, and fans are excited to get to see stories following these characters. Speaking on the characters, Julie McNamara, Executive Vice President and Head of Programming for CBS All Access, said:

“Fans fell in love with Anson Mount, Rebecca Romijn and Ethan Peck’s portrayals of these iconic characters when they were first introduced on “Star Trek: Discovery” last season, This new series will be a perfect complement to the franchise, bringing a whole new perspective and series of adventures to ‘Star Trek.’”