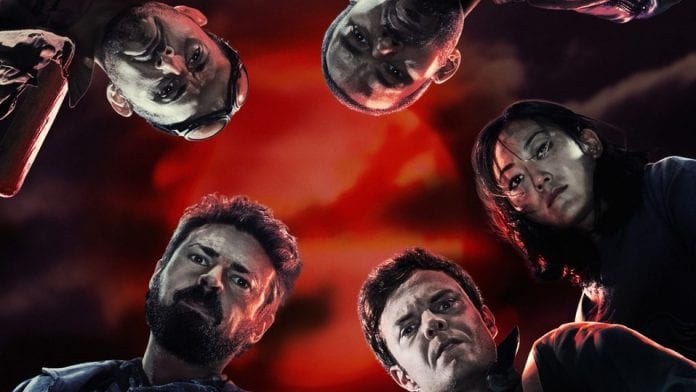 At long last we finally have news on Amazon Prime‘s The Boys Season 2! In a virtual panel, moderated by Patton Oswalt (who has a secret role in Season 2), showrunner Eric Kripke and the cast revealed that Season 2 will premiere on September 4, 2020.

Unlike with Season 1, however, the entire season won’t be premiering on September 4. Kripke revealed that The Boys will be switching to a weekly episodic release schedule. Before that bums you out too hard, the first three episodes will premiere on September 4.

“We cannot WAIT to show you season 2. It’s crazier, stranger, more intense, more emotional,” Kripke said in a statement. “In fact, it’s too much — so the Surgeon General has insisted we air the first three episodes on September 4, then air the remaining five episodes weekly after that. We wanted to give you time to freak out, digest, discuss, come down from the high, before we give you another dose. We only have your well-being in mind. Hope you love the season as much as we do.”

The schedule shift is a strategic one on Amazon‘s part. The Boys quickly became one of the most successful Amazon Original Series on the platform, shortly after the release of Season 1. Back then, the series debuted all 8 episodes on July 2019. By moving to a weekly format, traffic for the streaming service should be up for the entire month of September into October. Odds are Amazon hopes viewers will get hooked on other shows while there.

In addition to scheduling news, the virtual panel also showed off the first 3 minutes of Season 2. Skip over to the 47:35 mark to check it out. Fair warning though, it’s pretty violent.

As you can see in the initial footage of Season 2, Giancarlo Esposito‘s Mr. Edgar will have a bigger role in the sophomore season of The Boys. Joining the cast is Aya Cash. She’ll be playing Stormfront, the newest member of the Seven who has both plasma powers and social media in her arsenal. Amazon Prime revealed the new hero in a clip.

Season 2 finds the Boys — Hughie (Quaid), Mother’s Milk (Laz Alonso), Frenchie (Tomer Capon), and Kimiko/the Female (Karen Fukuhara) — on the run from the law with Billie (Urban) nowhere to be found. He’s been occupied by the surprise revelation that his wife isn’t dead after all and she’s been in hiding with her son, conceived when Homelander (Starr) assaulted her. Speaking of the Supes in the Seven, Starlight (Moriarty) now has to navigate her place on the team after facing off against A Train (Jessie T. Usher). With the threat of new supervillains, which were caused when Homelander gave the Compound V to international terrorists, Vought seeks to capitalize on the nation’s growing paranoia.