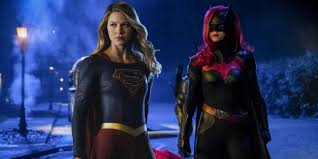 Many of us kind of expected this would happen since the first time we saw Kate Kane (Ruby Rose)and Kara Zor El (Melissa Benoist) team up and fight together in the ELSEWORLDS crossover. But it seems as if the CW is putting a bit of a twist to our vision of a WORLDS COLLIDE.

The CW Chairman and CEO Mark Pedowitz revealed that the network planning a two-hour event pairing Superman and Batwoman will be coming together in a crossover event. Unfortunately given the events of COVID-19 we will not be getting it in December as we are used to see the crossovers happen. That more than likely it will happen either the first or second quarter of 2021.

“We’re still working on it. It will be a smaller event than usual, we’re only planning a two-hour event. We are talking about doing Superman and Batwoman together. There’s a lot of characters coming from our other shows,” Pedowitz said.

It was also recently announced that the newest CW superhero show SUPERMAN & LOIS will be going straight to series. So it seems as if this crossover may serve as the backdoor pilot for the series. Also it is worth noting that BATWOMAN has been renewed for a second season.