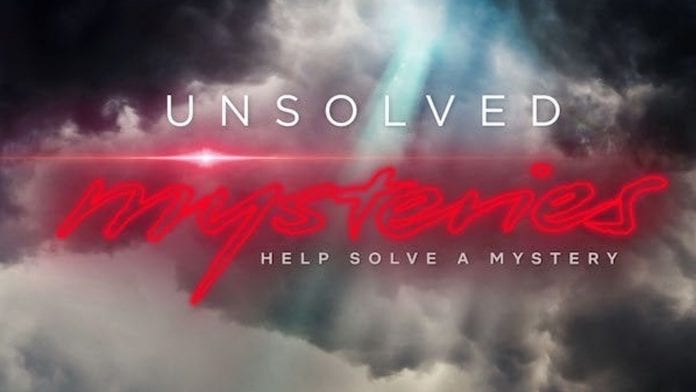 While Netflix’s Unsolved Mysteries brings more engaging whodunit’s to light, it no longer feels like the show we remember it being. We have some thoughts on how to change it.

Some people might be surprised to learn that I LOVE Unsolved Mysteries. Despite being a weenie when it comes to horror movies, I’ve always had an obsession with the real-world paranormal/unexplained. It’s something I know can be traced back to watching Robert Stack tell me all about some terrifying shit going down when I was a kid.

To this day, my normal TV viewing habits regularly include true crime shows (Snapped, Forensic Files, etc) and unexplained shows. As such, when Netflix brought back Unsolved Mysteries back in July, I was ecstatic. I blew through the first six episodes of the split season and was generally thrilled with the stories being told. Since then, I decided to go back to the original episodes (all of which are streaming on Amazon Prime) and enjoy the old seasons. Hell, even as I type this up, I’m using old episodes as my “on in the background while working” viewing. While the show is definitely dated in many ways, I was impressed at how well it’s held up overall as a series that manages to keep you engaged in the stories being portrayed—cheesy reenactments and all.

As I got the chance to check out the back half of the new season on Netflix (called “Volume 2”) a little bit before their launch today, my recent re-watch of the older Unsolved Mysteries episodes made some of the issues with the revival more apparent. Don’t get me wrong here, I still very much enjoyed watching these new episodes. They presented some genuine “what the fuck” moments that still have me scratching my head and hoping for justice. As interesting as these new mysteries are, however, the new show still feels like it’s missing some key aspects. The new format makes it feel like any other true crime docuseries on the market right now. The first episode of Unsolved Mysteries: Volume 2, chronicling the strange death of John P. Wheeler III felt like I was watching an episode of See No Evil (or just about anything else ID Discovery or Oxygen channel).

Considering the original series was something of the progenitor of that kind of show, the comparisons aren’t unwarranted. It’s a shame, though, to see this genre shaking show become derivative of the series which it originally helped inspire. It feels like Netflix could certainly change things up to make the series’ return feel more distinct once again. We Need a Host

One of the first things just about everyone noticed, is how the new take on the show has ditched the host aspect. I get the idea with trying to keep the show story focused on the interviews, but the absence feels glaring.

Beyond helping to keep things focused, and provide contextual details from the interviews, the narrator also gives viewers a connecting perspective. If you go back and watch some of the old episodes, you’ll see that Robert Stack did much more than re-iterate parts of the story.

He served as an intermediary between the people being interviewed, but also helped audiences feel like they were truly an integral part of the experience. It’s subtle in some ways. Stack uses simple terminology like, “we” to make it clear these cases being reported on will require a group effort to solve. There’s a personal aspect to HOW Stack worked as a narrator that made all the difference. Rather than being completely impartial/just the facts, he made us care about these mysteries. From the injustice of unexplained murders, to the hope of trying to reunite family members who’d been ripped apart, Robert Stack helped us empathize.

It’s an element sorely missing in the new episodes. I think they’ve done an excellent job conveying the mysteries purely through interviews (there’s impressive documentary skill involved), but I can’t help but feel like a passive observer, completely disconnected from the events. Much like watching a true crime show where the ending is known, there’s no sense of audiences being able to do anything or participate in any meaningful way. I know there will be a quite a few who don’t agree with this…but the new show needs to go back to episodes with more than one “Mystery” included. On top of ditching the narrator, the Unsolved Mysteries revival has also changed up how it tells the stories; with each mystery given its own dedicated episode.

The original series was also in the hour-long format (a tad shorter actually since Netflix doesn’t have any commercials to contend with), but managed to include several different stories. As I watched this back half of Unsolved Mysteries on Netflix, I felt the need to return to that style.

No episodes make that more clear than the two paranormal episodes included in the complete season (which really pains me to say). The first half included an episode about Aliens, while there’s one about ghosts/spirits in the second half. Both have interesting elements, but they quickly reach a point where I was just done with them. They felt dragged out and almost rambling. In trying to fill up an hours’ worth of time there were a number of ancillary elements included that felt only tangentially related. The result was growing bored. There were some fun parts to them, but not nearly enough to justify holding down an episode all to themselves.

Even as interesting as the true crime episodes are, they have moments as well that feel out of place and merely taking up time. This is one of the biggest ways the show feels too much like other crime docuseries. The format feels too similar to other shows without capturing what made the original Unsolved Mysteries stand out.

Including multiple stories in an episode–even just TWO stories splitting the episode–would help ensure things don’t drag out while also allowing even more mysteries to get the spotlight they might otherwise not. Considering the amount of tips already flooding in based of the new shows, there are a BUNCH of deserving stories that could use the extra attention.

On top of having a narrator that kept the stories focused and moving along, Unsolved Mysteries helped drive their points home via reenactments. These played out as the interviewees shared their stories, letting us watch the mystery play out even as we’re told about it. This allowed more stories to be told quickly, while also adding that dramatic aspect to invest us even more.

While they were often cheesy (part of the charm, in my opinion), these reenactments gave audiences a much needed visual aspect to help throw certain things into context. Put together with the aid of those who investigated the crimes, these scenes let us experience these stories in a way that talking head interviews simply can’t; all while adding another layer of empathy for viewers. While some of the episodes feature small reenactment moments, they’re far from the full-fledged recreations from the original show. Instead they feel my like b-roll footage used to fill gaps rather than tell a story. The exclusion of reenactments feel like another way in which the current version of Unsolved Mysteries has made itself more like other shows.

In some ways, it feels like there’s been an attempt to make this return feel more “professional” and wanted to veer away from any of the elements that would make it seem cheesier, or just pure entertainment.