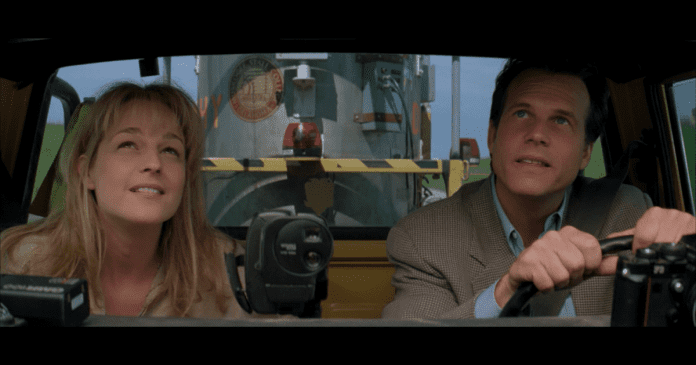 The iconic 1996 action/disaster film, Twister, is headed for the reboot treatment at Universal with the Top Gun Maverick director in tow.

Honestly, I’m not sure what to say/think here. Word has come out (thanks to Variety) that Universal is developing a Twister reboot. More so, they’ve already snagged a director (no writer just yet) to helm the upcoming weather related flick: Joseph Kosinski. Kosinski previously directed TRON: Legacy, Oblivion, and the forthcoming Top Gun Maverick.

To be honest, I’ve never particularly cared for Kosinski’s films. They aren’t bad, just…okay. Regardless, I’m still not sure how to feel about this Twister reboot in general. On one hand, I’m super excited. I love natural disaster films/tornado movies, and Twister is one of my all time favorites. Seriously, it’s a film I’ve watched countless times and is an easy “go-to” when I’m bored.

That said, it’s campy and has enough “technical” issues that the movie shouldn’t work. Yet it does. There’s a magic to the film that manages to work despite any flaws. Between the action and performances a bunch of things click to make it infinitely rewatchable.

How does a film even go about trying to purposefully recapture a vibe/presence that the original obtained by chance? It seems like a daunting task, and I find myself wondering why don’t they just make an all new tornado film?

Who knows what the new film will bring, whether it’ll be more akin to a remake, or will find a way to incorporate characters from the original. But let’s be honest, I’m going to end up seeing it either way.

How do you feel about a new Twister film?