Like I said, I already went over all that I loved in Avengers Avengers, so if you haven’t checked that out yet, please do. This is essentially part 2 of my review/toplist hybrid for the film, though I will go right ahead and tell you this film is well worth your money…a few times. Still, here are a few things I didn’t like so much in the film (warning there are some spoilers throughout): 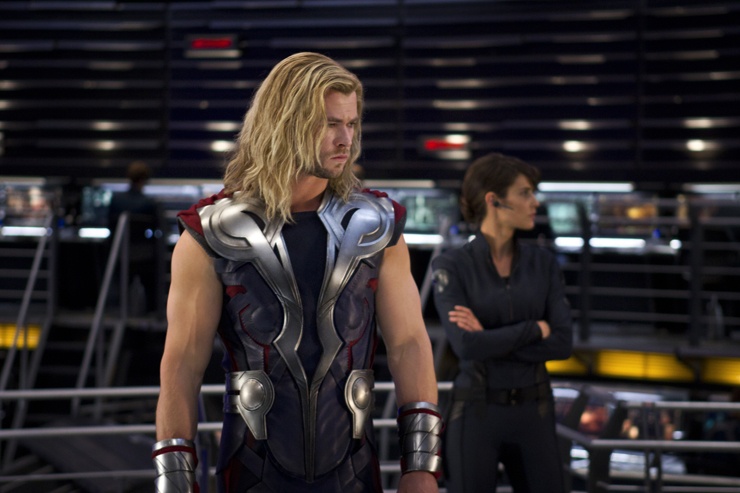 For the most part, the film does an excellent job of showing how all of these characters are thrust into the same story and circumstances. The only exception to this is Thor. His sudden reappearance on Earth just sort of…happens. There is literally one line of dialog that is used to explain how he came back to our planet and even then it basically boils down to ‘magic’.

This wouldn’t have been an issue if they hadn’t made it such a big deal in the Thor movie. By the end of that film, Thor’s destruction of the rainbow bridge causes the hero a lot of sorrow, because it severs the link between his world and ours. He’s heartbroken and the audience is led to believe that it will take a lot of effort to discover another path for Thor to return. It’s a massive deal to him, and a big sacrifice he makes in order to set things right.

So when he pops back up on Earth with hardly any explanation, it makes you wonder why the end of Thor was a big deal at all. In short, it lessens the impact of Thor’s sacrifice in his movie and makes you question its importance. Seriously, a short 2 minute scene in Asgard showing exactly how Thor returns would have eliminated my issue here.

While Loki’s motivations in the movie are very clear, the other villains’ aren’t. I’m talking about the alien army that Loki leads; the Chitauri. From the very beginning of the film (literally the first scene) it’s obvious that Loki is part of something far larger. He’s not the head honcho and even though he’s concocting all of these plans, it’s for someone else.

Throughout the film, I found myself wondering…”Why are these guys interested in Earth?” because this is something that’s only marginally explained. Supposedly they are interested in the Tesseract (or Cosmic Cube) and the power it contains. Yet Loki snatches it up within the first few minutes of the movie. Theoretically all the aliens would have to do is send one more person through the ‘portal’, collect the cube, and be on their way. There’s no real reason to send in an army against the planet.

I suppose it would be to fulfill their end of the deal in giving up the planet for Loki to rule…but that explanation felt paper-thin. Their ultimate motivations aren’t clear. The audience isn’t told why they even want the Tesseract or how they plan to use it. Sure, every villain wants power, but I was hoping they would go a little deeper with that. Oh well, I suppose that’s what sequels are for.

The Reason They Unite In the End (SPOILER HEAVY)

Okay, so I gave a minor spoiler warning above, but what I’m about to talking involves a very large spoiler. So if you haven’t seen the film yet and don’t want to ruin anything, I would just scroll on down to the end of the article…..All right if you’re still here, the film presents a reason for the heroes to put aside their differences and unite into one working team: the death of Agent Coulson.

It was actually a very emotional moment when Coulson dies. He’s a character fans have come to love, and the unifying factor between all of the films. His death is meant to be the catalyst that pushes the Avengers into fighting together, rather than with each other. That’s how it works within the story, but in its execution, I’m not entirely sold on it.

First of all, two of the main Avengers aren’t even around to find out Coulson is dead (yet they still join the fight) and secondly, Tony Stark is the only real Avenger who could be called ‘close’ to Agent Coulson. Because of those factors, Coulson being a rallying point didn’t completely make sense to me. It’s not a huge deal really in the long run, but in that regard his death wasn’t as powerful as it could have been.

Oh and let me say this as well…I don’t think Coulson is actually dead either. Something about it felt too convenient for Nick Fury’s plans (they literally say so in the film). Fury is all about deception and using it to get what he wants. I have a feeling we’ll see more of Coulson in future films.