You can ask my parents this, when I was a kid the only thing I watched that wasn’t Star Wars related, was more than likely the original Clash of the Titans.  I was enamored with this film and the epic story, and it’s still a film I look to for inspiration to this very day.  It’s an excellent demonstration of story-telling and how to do it even with a bunch of special effects (even though they’re pretty dated now).  All of the things that made the original Clash of the Titans so amazing was tossed out the window in it’s reboot a couple years ago.

I hated the film.  It truncated what was a phenomenal mythological story and instead managed to kill any type of character building and make the audience not give a crap whether Perseus won or lost.  For this reason, I couldn’t bring myself to watch Wrath of the Titans in theaters.  I was still upset.  Even so, I was hopeful that the filmmakers had learned from their mistakes and managed to get things right this time.  I was encouraged when even Sam Worthington (Perseus) said in an interview that he knew Clash was crap, and they weren’t going to let that happen again.

So when WB sent me the blu-ray, I kept my fingers crossed.  The result?  I didn’t hate it…but there were quite a few issues.  To be honest, Wrath suffered from many of the same problems as Clash did, but it did a much better job at telling the story.  The first film felt like they were trying to go too epic in scale and so the story felt too dense and not expounded upon well enough.  While there is still the element of ‘save the world’ to Wrath, the story basically boils down to a rescue mission. 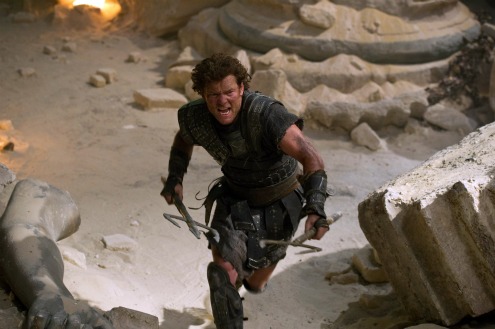 By paring it down to a smaller kind of story, it gave the film some much needed breathing room and the ability to develop the ideas a little more.  The problem is they didn’t always take advantage of those opportunities.  The characters in the film are as undeveloped as they were the last time.  Whenever someone died I could have honestly cared less.  There are two characters that also go through some dramatic changes of heart in the story, but I can’t honestly tell you the reasons why they did.  It just sort of happened and the film seemed to expect you to accept it without any questions.

The action was exciting, but for a film about Greek Mythology I was really hoping to see a bunch more mythological creatures.  There were only a handful and only were on the screen for a little bit.  The blu-ray quality is good, and the bonus features are your standard fare but still pretty nifty to watch how they brought some of the visual effects to life on the screen.

Like I said, I didn’t dislike it nearly as much as I did Clash of the Titans.  It’s a mindless popcorn film and you can’t expect everything to make sense.  With such a rich background of story to pull from however, I was really hoping for more.

Wrath of the Titans, available now on blu-ray/DVD and digital download, gets a 6 out of 10.