Three high school students make an incredible discovery, leading to their developing uncanny powers beyond their understanding. As they learn to control their abilities and use them to their advantage, their lives start to spin out of control, and their darker sides begin to take over.

All right, I’m going to say this to start with…Chronicle is the future I want for found footage films. I’m a sucker for the genre really. I fell in love with it because of Cloverfield and it’s something I’ve enjoyed ever since. Even so, the genre was starting to grow a little stale. While the Paranormal Activity series did a great job of expanding the genre (by switching from one static camera to multiple views), audience interest was starting to wane.

Chronicle will hopefully change that perception. It does a lot of things right, and in 83 minutes manages to tell a better ‘fall to the darkside’ story than Star Wars did in three prequels. It starts off fairly slow, but eventually builds into something epic. A big part of that, is how the camera is handled.

Found footage films generally suffer from the same problem; the camera. It has to be held by someone or propped up (like a security camera) in order for it to seem plausible. If not, the whole notion of the found-footage goes right out the window. But Chronicle deftly avoids this pitfall by using the super powers of the main character. As the story progresses and Andrew (who owns the camera) grows more powerful, he starts using his telekinesis to hold the camera. This allows him to be in front of the camera with everyone else, without seeming out of place. It also allows the camera to do things it wouldn’t normally be able to in this genre. At times this comes off as a little too cinematic, but it still works surprisingly well.

As for the story, it’s paced very well. Like I said, it starts kind of slow, but gets real interesting when they get their powers. While what actually happens to them remains a mystery, what follows afterwards feels like a plausible chain of events. The way they explore and discover their powers feels natural. By all accounts it seems like exactly what teenagers would do if they had superpowers. More than that though, Andrew’s (the lead character) descent also makes sense.

The audience can easily see the path he follows and how he got there. Truthfully, for the most part, you sympathize with him. It doesn’t excuse many of his later actions, but it makes for a more engaging final confrontation than your typical superhero film.

As for things that didn’t work…Near the end, there’s some weird camera work that doesn’t really make sense for the found-footage. They sort of explained how the cameras got there, but it still is a little too cinematic for the genre. That’s a fairly minor thing though. The main issue, is the problem all found-footage films have; you want to know more. Since you’re stuck behind certain cameras, you don’t always get to see the things you want to, or have explanations for the things you want. This can be frustrating, but in Chronicle it never felt like it detracted from the story (like it does with some films).

In the end, we’re left with a great coming of age, superhero story. Most superheroes abide by the similar concept that “with great power, comes great responsibility”. But, where most movies overtly tell the viewer this and present the protagonists with that choice, it’s much more subtle in Chronicle. Instead of being told this principle, the characters have to live it, and learn it on their own. For us in the audience, it’s really interesting to see how they each come to their own conclusions on this.

Acting – Everyone delivered great performances, and the characters felt entirely natural. You really felt like they were teenagers and they responded just like you expected them to in certain situations.

Directing – Josh Trank did a great job directing this. While some things felt out of place for found-footage, the way it’s explained is plausible and makes for some memorable moments.

Writing – This is a superb script. Though it feels kind of short, the pacing flows very well and tells a believable (as much as can be) story, while generating characters you truly care about and want to get to know.

Sound – Considering that this genre doesn’t utilize a musical score, it’s amazing how well Chronicle was able to cram in quite a bit of music. Considering they’re high schoolers, there’s a lot of music in the background of parties and what not. On top of that, everything sounded natural and realistic.

Visuals – It’s a lower budget film, but the few instances were they had bigger VFX shots, worked quite well. Since it’s all supposedly from a consumer camera (even a few cell phones at times), any lapse in the effects can easily be covered up. 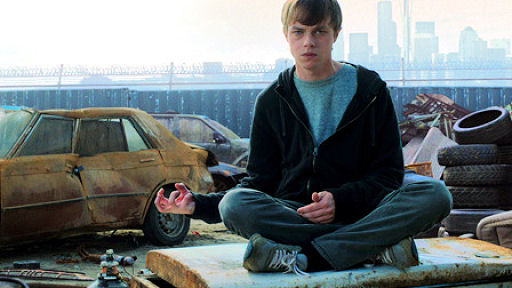 Though we’re only into the second month of 2012, I feel Chronicle has already set a pretty high bar. While it wasn’t a perfect movie, it’s does everything right for the genre and steps it up for all found-footage movies. If this genre is going to be sticking around, there’s a lot of things it can learn from this film. This is definitely a film you need to see in theaters.

– The fact that they acknowledged how cold it would be to really fly in the air like that (they had to wear skiing clothes), gave this film a lot more credibility to me.

– Chronicle is a perfect name for this film, based on how it’s taken from several different cameras and the overall story.

– Josh Trank would be a wonderful director for a Fantasic Four reboot…I just don’t know if I want that movie. I’d rather see Trank continue to make other films.