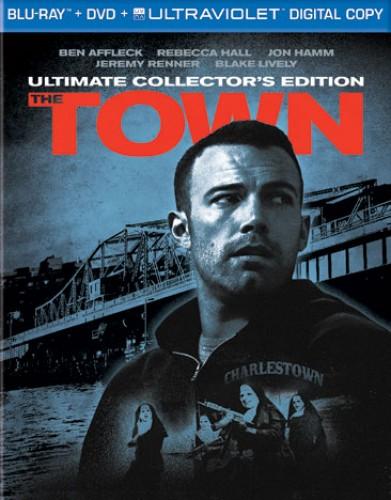 Here’s the official synopsis for the film:

Doug MacRay (Ben Affleck) is an unrepentant criminal, the de facto leader of a group of ruthless bank robbers who pride themselves in stealing what they want and getting out clean. With no real attachments, Doug never has to fear losing anyone close to him. But that all changed on the gang’s latest job, when they briefly took a hostage–bank manager, Claire Keesey (Rebecca Hall). Though they let her go unharmed, Claire is nervously aware that the robbers know her name… and where she lives. But she lets her guard down when she meets an unassuming and rather charming man named Doug….not realizing that he is the same man who only days earlier had terrorized her. The instant attraction between them gradually turns into a passionate romance that threatens to take them both down a dangerous, and potentially deadly, path.

This new Ultimate Collector’s Edition also comes packed with movie memorabilia, the extended cut, plus an never before seen alternate ending to the film.

I hate to admit this…but I haven’t watched The Town until now. I didn’t see it in theaters, nor did I catch up on it when it first hit store shelves. At first I thought it was a little odd that this release was getting an Ultimate Edition. Normally those are for your big sci-fi type films. I know I’m not alone in that feeling, but I have to say, this Collector’s edition is brimming with all kinds of goodies. They did a great fan service with this film and I was impressed at the shear amount of stuff they included.

Let’s talk about the movie itself real quick. The film has been out for a while, so I won’t belabor this review talking too much about it. Chances are good you’ve probably seen it already. If you haven’t…You need to. I went into the film expecting a typcial heist film/redemption story. While at it’s heart, that’s what the film is about, The Town goes far beyond that.

This thing could have easily been filled with cliche after cliche, but it’s much smarter than that, and deftly avoids falling into cliche pitfalls, just when you think it’s coming. I was impressed by the acting (even a very surprisingly awesome role for Blake Lively), and everything felt natural. None of the characters felt underused or wasteful. Affleck managed his time well and crafted realistic characters around a (fairly) realistic story, that you can’t help but be enraptured by.

Like I said, if you haven’t seen it, you’re definitely missing out on a great film. So now let’s talk about everything else in this edition. You get an extended version and then an extended version with an alternate ending. So you’re kind of getting three for one. I will say though that I didn’t feel the extended version of the film made anything better. The extra scenes weren’t bad by any means, but they made some of the things in the movie redundant (the biggest one being Affleck’s character answers the same question about his parents twice).

I won’t spoil the alternate ending for you, but I am interested to see how fans of the original version of the film will react to it. That’s not saying it’s bad or good, but some fans will really enjoy it, while others will want nothing to do with it. It’s definitely something you’ll have to decide for yourself. Now, onto the extras that come in this edition:

Director’s Letter: A signed note from Affleck describing his motivation for providing a third version of the film.

Poster-Size Map of Charlestown with Locations of Major Scenes

Mug shot cards of the four members of Doug’s crew

Rub-On Tattoos: Reproductions of Jim’s “Fighting Irish” tattoo, ready for application to anyone’s neck (This one is silly but goofy fun).

On the disc you’ve also got commentary tracks, a 30 minute featurette in which Ben Affleck talks about his directing process during the film, and then some shorter mini-featurettes about the making of the film. In all, it’s got tons of stuff for fans of the film and fans of movies in general. I love film, and collector’s editions like these always make me happy.

Let’s face it, not everyone is a big movie nerd like me and gets giddy about the goofy extras in a collector’s edition. However, this boxset feels designed specifically as a service to the fans and there’s nothing wrong with that. Regardless, even without all the bonuses this film is well worth your time, and if you already have it in your collection, I think this set will make you feel justified in purchasing it again.

The Town Ultimate Collector’s Edition Blu-Ray (which is available now) gets a 9 out of 10.