Two geeks visiting the U.S. from England (Simon Pegg and Nick Frost) cross paths with a runaway alien on their roadtrip from Comic-Con to Roswell. This alien doesn’t evolve from a face-hugger or ride bicycles through the sky; this alien’s name is Paul (voiced by Seth Rogen) and he enjoys Marvin Gaye, bratwurst and somking lotsa weed (I told you he was played by Seth Rogen, didn’t I?). Paul convinces the two Brits to help him escape his government pursuers in a rental RV and the fun starts from there.

Surprise! The guys who made Shaun of the Dead and Hot Fuzz are still hilarious. Paul is the kind of movie that makes you feel like you’re a part of a club that others (be they muggles, mundies, or normos) just aren’t privy to. It rewards those of us who have followed the sci-fi genre for decades with one clever joke after another. See? All those swirlies and wedgies from junior high are now totally worth it! The chickens have come home to roost! Those dumb ol’ jocks wouldn’t be able to decipher the nuanced humor of Paul if they had a Rosetta Stone written by C-3PO. See, while they were sculpting their delts, we were in our dark, damp bedrooms with a bottle of Mountain Dew and a barrel of cheese balls lapping up every word that came out of Han Solo’s mouth like it was a margarita made by Zeus. It’s a movie made by sci-fi fans for sci-fi fans, brimming with more geek references than an episode of “Community.” Simon Pegg and Nick Frost’s love of the genre is evident in every scene.

But the script’s not the only thing going for the movie. I’ve got good news for anyone aged 20-30: all your favorite people are in this movie! The cast includes Simon Pegg, Nick Frost, Seth Rogen, Kristen Wiig, Jason Batman, Bill Hader, Jeffrey Tambor, Jane Lynch, David Koechner, Sigourney Weaver … I’ll stop there becauase my fingers are too tired from the awesomeness, but I assure you it goes on. Each one of these guys and gals are great and play off each other well. In fact, I’d wager it’s the funniest I’ve ever seen Kristen Wiig (and I’ve seen me some Kristen Wiig).

On a techhnical level, the CG character model for the titular character is great. It can’t be easy to animate a character that’s completely alien with such convincing human expression an mannerisms. Paul looks more real than Sam Worthington (who, to be fair, is a wooden puppet). This is the first time we’ve seen Simon Pegg and Nick Frost paired together onscreen without Edgar Wright behind the camera and the difference is noticeable. It’s not that Greg Mottola’s directing is bad; it’s entirely serviceable. It’s just not good enough to really elevate Paul to the level of Pegg and Frost’s previous collaborations. The cuts and shots are all very ho-hum, lacking the frantic, kinetic feel of Wright’s work.

The pacing’s got issues as well. The first act of the film takes a little too long to get going, and there are still momentum problems even once everything’s in full motion. We’re constantly following two separate threads: the story of Pegg, Frost and Paul, and the story of the government agents chasing them. The scenes with the three protagonists are consistently funny, but the government agent scenes really throw a wrench in the gears. While some of them are funny, most feel like they’re just there to remind us that those characters still exist. 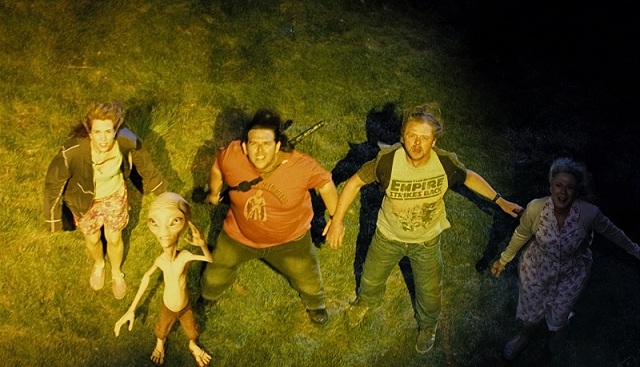 Lastly, many of the characters feel completely inconsistent. One minute a character’s sympathetic to the poor pot-smoking alien, the next he’s trying to kill him. This problem’s exacerbated by the often too unbelievable motivations for the characters. What was great about the Edgar Wright-directed Pegg/Frost romps was that the characters had a sense of integrity and fidelity to them. They were goofy movies, but the characters were relatable. That’s just not the case here. The movie doesn’t suffer too much for it, but it’s distracting enough to dampen some of my enthusiasm.

Hey, you like sci-fi? How ’bout when that sci-fi’s funny? Did you think Nick Frost was the only good part about Pirate Radio? Can you name at least three Star Wars characters who had no speaking parts in the films? Go on, check yourself. I’ll wait. Yeah? Okay, then you’re gonna like this movie.