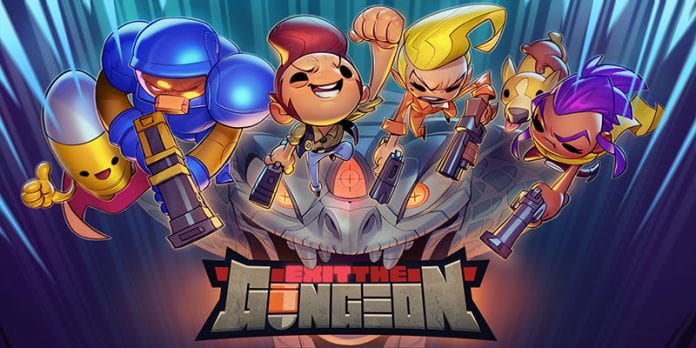 More than 20 indie games are finding a home on the Nintendo Switch and we got a peek at the exciting titles set to launch through 2020 in today’s Indie World showcase.

“Independent developers from around the world have continued to find a home on Nintendo Switch,” said Steve Singer, Nintendo of America’s Vice President of Publisher and Developer Relations in a press release. “Developers get to launch their games on a system that can be played at home or taken on the go, while fans can enjoy a rapidly growing library of these diverse and inspired indie games.”

Nintendo spotlighted a mix of the titles, some of which launch on the Switch today. You can read Nintendo’s highlights below and take a peek at some of the trailers below:

• Exit the Gungeon from Dodge Roll & Singlecore Games: Exit the Gungeon is a bullet-hell dungeon climber immediately following the events of Enter the Gungeon. Armed with an ever-changing weapon, an insatiable need to loot and the trusty dodge roll, each of our heroes must ascend and escape via their own unique route of increasingly perilous elevators. Exit the Gungeon launches on Nintendo Switch as a timed console exclusive later today!

• The Last Campfire from Hello Games (No Man’s Sky): Discover a beautiful wilderness filled with lost folk, strange creatures and mysterious ruins as you journey to light the
last campfire. Experience a truly moving tale of magic and mystery when The Last Campfire launches for Nintendo Switch this summer.

• Blue Fire from Robi Studios: Embark on an extraordinary journey through the desolated kingdom of Penumbra and discover the hidden secrets of this long-forgotten land. Explore mystical temples, encounter survivors and take on strange quests to collect valuable items. A dark world awaits when Blue Fire launches first on Nintendo Switch as a timed console exclusive this summer.

The action-adventure RPG @BaldosTale is coming to #NintendoSwitch! Explore an open world filled with towns to discover, secrets to unveil, and intricate dungeons to solve this summer. #IndieWorld pic.twitter.com/c2J8r1FoLY

• Baldo from Naps Team: Meet many weird and funny characters and become immersed in the amazing world of Baldo, an action-adventure RPG full of puzzles, intriguing gameplay mechanics and intricate dungeons to solve spread through a wide, interactive open world. Baldo launches first on Nintendo Switch as a timed console exclusive this summer.

Explore the afterlife and save your home island from a deadly volcanic eruption in #IAmDead, a charming puzzle game from @hllwpnds and @A_i, coming to #NintendoSwitch in 2020! #IndieWorld pic.twitter.com/Aq4MHts5mG

• I Am Dead from Hollow Ponds: I Am Dead is a charming puzzle adventure game,
from the creators of Hohokum and Wilmot’s Warehouse, about exploring the
afterlife. I Am Dead launches first on Nintendo Switch as a timed console
exclusive later this year.

Team B.ARK is reporting for duty! Pugs, cats, bears, and bunnies are here to save the solar system!
Pilot powerful yet adorable ships as you team up against waves of enemies when #BarkGame from @tictocgames comes to #NintendoSwitch in 2020. #IndieWorld pic.twitter.com/xKjevHsGVe

• B.ARK from Tic Toc Games: It’s time for pugs, cats, bears and bunnies to save the solar system! Call your friends over to pilot powerful yet adorable ships, as you team up against waves of enemies in a side-scrolling shooter. B.ARK blasts off first on Nintendo Switch as a timed console exclusive in late 2020.

• Cyanide & Happiness – Freakpocalypse: Part 1 from Explosm Games: You play as Coop “Go Away, Weirdo” McCarthy, and all you want to do is make the world a better place. The trouble is: Nobody likes you, school sucks, you can’t find a prom date, everybody bullies you (including your teachers) and your attempts to help only make things worse. Get ready for a world full of weirdness when Cyanide & Happiness – Freakpocalypse: Part 1 launches first on Nintendo Switch as a timed console exclusive this spring.

Explore an open ocean as you customize your own island with buildings, crops, and farm animals in #SummerMara, a farming adventure game from @chibigstudio, coming to #NintendoSwitch this spring! #IndieWorld pic.twitter.com/8wJ9rcUODJ

• Summer in Mara from Chibig: Take care of your own island and explore the ocean in this farming adventure. Discover the story of Koa in a game that combines farming, crafting and exploring in a tropical archipelago with a colorful style and strong narrative. Summer in Mara launches first on Nintendo Switch as a timed console exclusive this spring.

Join the @QuantumLeague from @NimbleGiantEnt and outmaneuver your opponents in this unique 1v1 and 2v2 multiplayer Time-Paradox shooter coming to #NintendoSwitch in late 2020! #IndieWorld pic.twitter.com/6VnJ1HaN4M

• Quantum League from Nimble Giant Entertainment: Quantum League is a revolutionary time-paradox shooter: a competitive online FPS in which you battle within a time loop, tactically teaming up with your past and future selves in mindblowing 1-v-1 and 2-v-2  matches. Quantum League time warps onto Nintendo Switch in late 2020.

From the mind of @Swery65, #TheGoodLife is a mystery RPG set in a special town where the quirky inhabitants turn into cats and dogs under the full moon. The investigation begins on #NintendoSwitch in 2020! #IndieWorld pic.twitter.com/OL7IuOMGbx

• The Good Life from White Owls Inc.: Become a journalist from New York and head out to research Rainy Woods, the world’s happiest town in the English countryside. But Rainy Woods also hides a great secret. On full-moon nights, the inhabitants turn into dogs and cats. Enjoy the bizarre charm of Rainy Woods when The Good Life launches on Nintendo Switch later this year.

• PixelJunk Eden 2 from Q-Games: Jump, spin, swing and take out invading creatures to collect pollen and grow gardens back to full bloom. Along the way you’ll encounter a host of creatures and beautifully realized alien worlds to explore and liberate. Wallow in a feeling of synesthesia as the art and exquisite music from Baiyon envelops your mind and soul, and you, your Grimp and the delightful aesthetics of PixelJunk Eden become one. Enjoy this wonderland alone or with a friend via local multiplayer when PixelJunk Eden 2 launches on Nintendo Switch this summer.

Enter the fantasy world of #Faeria and experience a strategic card battle game with a unique living board when @EnterFaeria from @vs_evil arrives on #NintendoSwitch this spring! #IndieWorld pic.twitter.com/F1jaGqNhxI

• Faeria from Abrakam: With its unique living board, Faeria will challenge you
with truly strategic card battles. Craft your deck, shape the battlefield and fight for
victory! The Nintendo Switch version of Faeria launches in Spring 2020.

• Eldest Souls from Fallen Flag Studio: Set in a grim, dark fantasy world, Eldest
Souls innovates boss-rush gameplay with a high level of combat customization.
Be among the first to take up the challenge when Eldest Souls launches on
Nintendo Switch as a timed console exclusive this summer.

• Moving Out from SMG Studio/DevM Games: For fans of cooperative gaming, Moving Out is an action-, puzzle-, physics-based moving simulator that brings a whole new meaning to “couch co-op.” Play alone or locally with friends in more than 50 levels across arcade, story and versus modes. Moving Out launches on Nintendo Switch on April 28, with pre-purchase for the game available now. Anyone that wants to try Moving Out now can head to Nintendo eShop on Nintendo Switch to check out a free demo.

• Sky Racket from Double Dash Studios: Flying over whimsical worlds filled with vivid colors, it’s just you, a stylish scarf, a laser tennis racket and a horde of fluffy enemies trying to blow you back to the ground. Mixing the classic genres of shoot-’em-ups and block breakers, Sky Racket is the world’s first “Shmup Breaker!” Sky Racket launches on Nintendo Switch later today!

Other indie titles in the showcase that will come to Nintendo Switch this year include Blair Witch from Bloober Team, Bounty Battle from Dark Screen Games, Dicey Dungeons from Distractionware Limited, Ghost of a Tale from SeithCG, Sky: Children of the Light from thatgamecompany, Superliminal from Pillow Castle and Wingspan from Monster Couch.

Welcome to @NintendoAmerica’s official #IndieWorld account! Be sure to follow us for the latest ongoing news about great indie games that can be found on #NintendoSwitch! pic.twitter.com/AmTrauchet