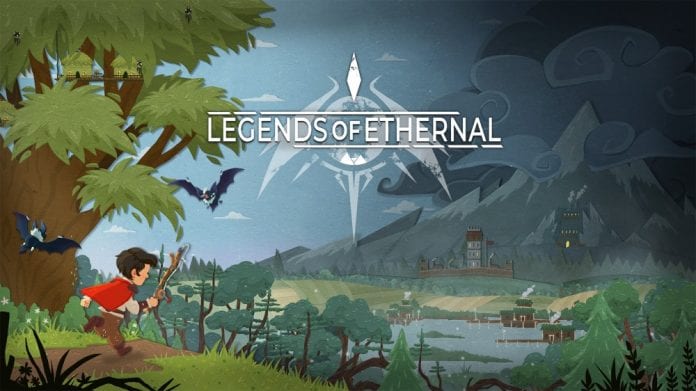 Natsume revealed new details about Legends of Ethernal, giving players a look at the hand-crafted environments in the game.

Legends of Ethernal is a 2D action-adventure where players will explore beautiful hand-crafted environments, solve clever puzzles, and battle challenging creatures to uncover the truth about Wilfred’s parents’ disappearance.

In today’s update, developers revealed more about the world of Arkanys, Lope Village and what players should expect as they search for Wilfred’s parents:

“Since the beginning, we wanted our story to start with Wilfred fishing in the lake. He doesn’t exactly like fishing, but he has to do it for his father, as he is still too young to travel to Lope Village and get a job there as a squire for the city guards, a blacksmith’s apprentice, or a busser at the Baumann Inn. It’s a calm and peaceful job, exactly how the Van Dervill family has always been. We wanted to have a good progression for the game’s environments by starting in light, heartwarming, and calm zones to gradually progress through darker areas, matching the game’s theme and story. The events in the game happen in the north of Ambess province. The whole Arkanys world has been in development for over 20 years, taking its root in a D&D campaign and evolving to become something complex and polished.

“Arkanys is a massive, ecologically diverse stretch of land, renowned both for its beauty and wealth of natural resources, divided into six major regions. Ashantra, Arkanys’ capital, is an opulent city-state that contains most of the continent’s reputable libraries and academies. Otlesko is famous for its beautiful mountains and mines replete with rare ores. Its neighbor Ambess is a large metropolis built within a massive orchard-forest. Urphé to the far north is a frigid land filled with nomadic tribes faithful to the gods, whereas the southernmost state of Yatipha is an isolated jungle shrouded in mystical phenomena. Lastly, the coasts of Enrich Malar Tock, the trade capital of the world, sail these countless riches to the corners of the continent.

“Lope Village is a quaint little burg that sits at the edge of both the Yunai River and Mount Thornüst, Lope Village has, in recent years, become a key point of commerce between the Orchards of Ambess and the Duchy of Otlesko. Situated right between the borders of these two high-export locations, the village has carved itself a niche as a trading post between the two towns’ regions. It’s also famous for its beautiful forests, freshwater fish, exemplary potions, and talented smithy. The village used to have a thriving mining community operating in Thornüst’s underbelly, but a mysterious incident years ago forced the operation to close.

“The Arktree Lakeshore can be found near a big lake where lots of fish and peaceful creatures live. Many families of fishermen live in this area. Not too far from the Arktree Lakeshore, in a calm and pretty grove, lives the Van Dervill family. It’s the perfect spot for whole family, as Flora Ban Dervill is an adept herbalist and alchemist, so she has close access to tons of flowers and herbs in the area. This location is also perfect for Falken Van Dervill, as he is not too far from the lake where he can fish. He then sells his catches in Lope Village. However, to reach the village, he needs to travel through the Wurgen Valley that is located at the feet of the huge Mehdhun Tree, home of the peaceful Jarken Tribe. Wheat and other crops are cultivated in the valley, but the high grasses make it the perfect spot for the Wurgen, a wolf-like creature, to hide and attack its prey.”

Last month, developers revealed more about the story in Legends of Ethernal, which included a closer look at the the inhabitants of Arkanys.

“Arkanys is a land of many creatures: the majestic Jarkens, birthed from the sap of Mehdhun Tree, often live as long as a millennium. The Brüwigs: An amphibious folk who are skilled swimmers with strong lungs. Their sturdy lungs are likely a reason for their favored weapons: blowguns, with which they can use to fire darts over long distances. The haunting Dakrei: An omnivorous, venomous insect-like race with a huge queen as their leader…”

Natsume announced in June that Legends of Ethernal, developed by Lucid Dreams Studio, was added to its’ burgeoning Indie Program.

Legends of Ethernal is set to launch on PlayStation 4, Xbox One, Nintendo Switch and PC this fall.