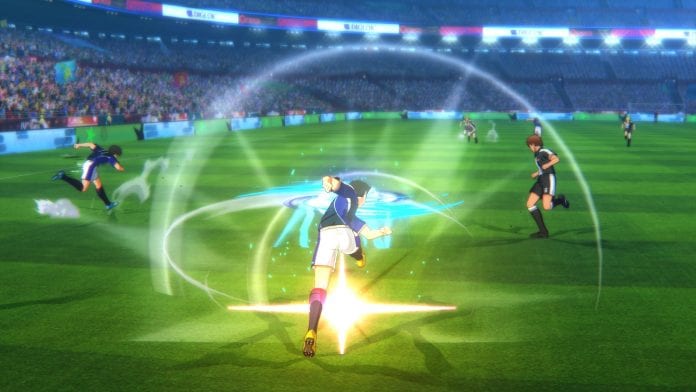 Bandai Namco is wading into the video game sports genre the best way they know how; with over the top anime action. Check out the first details for Captain Tsubasa!

Everyone knows I’m not huge on sports games, but one of the few I get into are typically Soccer titles. Even in these, however, I prefer a more stylized feel to them, so you better believe this morning’s reveal trailer for Captain Tsubasa: Rise of New Champions caught my eye:

Not going to lie…this looks absolutely ridiculous but in the best ways possible. The anime hyper-drama, combined with more action infused soccer game mechanics just looks like a silly amount of fun. Either way, I’m pretty much all in already.

Leading anime video game developer and publisher BANDAI NAMCO Entertainment America Inc. today announced that Captain Tsubasa: Rise of New Champions will be making its long awaited return to video game consoles in the Americas for the PlayStation 4, Nintendo Switch, and PCs via STEAM. Based on the works of series creator, Yoichi Takahashi, the game chronicles the athletic exploits of Tsubasa Ozora and the glory and success his teammates experience under his leadership.

Captain Tsubasa: Rise of New Champions immerses players in a fantastic anime portrayal of the world of professional soccer. Players will be able to execute an array of powerful offensive and defensive super moves as they battle powerful soccer teams. The game will feature multiple gameplay modes including Story Modes, Versus Mode, and Online Versus Mode.

To be honest, I’ve never heard of the Captain Tsubasa series before, but considering most of the games never made it outside of Japan (and even that one was over 10 years ago). As such, I’m very much looking forward to checking this one out when it releases on PS4, Nintendo Switch, Xbox One, and PCs later this year.