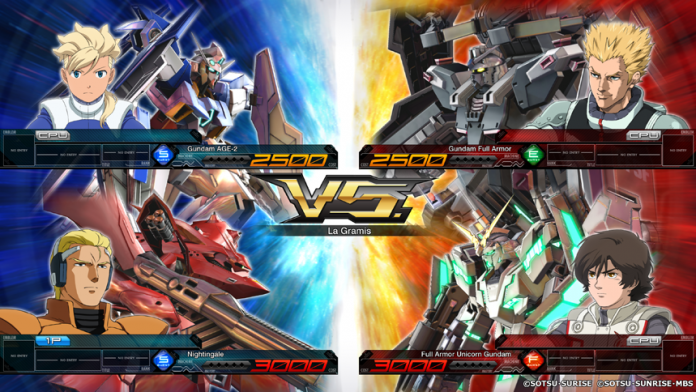 Bandai Namco announced today that Mobile Suit Gundam Extreme Vs. Maxi Boost ON will be launching on PlayStation 4 in North America later this year.

Mobile Suit Gundam Extreme Vs. Maxi Boost ON is a 2-on-2 player-versus-player Mobile Suit combat experience set in the Gundam universe. The game features 183 playable units from 36 different Gundam iterations for up to four players in co-operative and PVP play.

“The Extreme VS series is known for its high-octane brand of PVP Mobile Suit battles, and Mobile Suit Gundam Extreme Vs. Maxi Boost ON is primed to take that style of combat to awesome new heights never-before-seen by Gundam fans in the Americas,” Abelina Villegas, Associate Brand Manager at Bandai Namco Entertainment America Inc., said in a press release. “We can’t wait for Western fans to get their first taste of the title that’s captivated Japanese arcade-players for years when it finally makes its console debut on the PlayStation 4.”

Bandai Namco did not give an exact release date for Mobile Suit Gundam Extreme Vs. Maxi Boost ON, but the trailer description on YouTube says the game will release on PlayStation 4 in 2020.