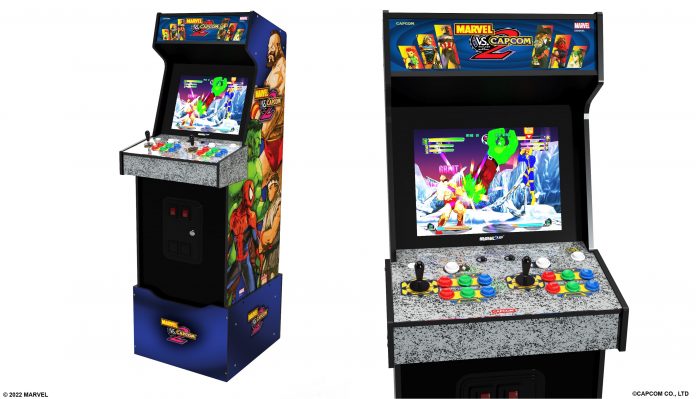 Arcade1Up has announced a new fighting game cabinet for gamers, allowing fans to bring Marvel vs. Capcom 2 into their homes for the first time with wi-fi.

One of the greatest fighting games made is getting an Arcade1Up cabinet this Fall. The news comes right as the Evolution Championship Series (EVO) kicks off in Las Vegas.

This cabinet is absolutely stacked as well. On top of bringing Wi-Fi to the games so you can play with other opponents, it includes seven additional classic fighting games:

Get ready to punch, kick, fly, and blast! The most popular fighting game of all time is coming to living rooms everywhere! Arcade1Up, the leader in at-home retro arcade game entertainment, today announced Marvel vs. Capcom 2™ home arcade machine – the first time fans will be able to bring the game into their homes in retro format, modernized with Wi-Fi. Starring every great character from the Marvel vs. Capcom 2™ rosters – 56 in total – the machine will feature eight classic titles.

Pre-orders for the Marvel vs. Capcom 2 cabinet will be going live on September 8th ahead of their release this Holiday season. Be sure to head over to Arcade1Up’s site to learn more about the new release.