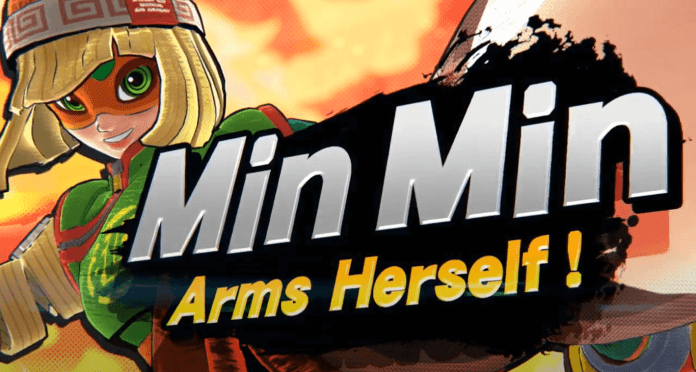 Nintendo finally revealed the latest fighter to join Super Smash Bros. Ultimate. Unlike with previous reveals, Nintendo was pretty transparent about which game the character would be from. They announced this character would be a fighter from their original fighting game, ARMS.

After a beautiful, artistic reveal trailer, the fighter joining Smash was none other than the Ramen-armed badass, Min Min.

Super Smash Bros. Game Director Mr. Sakurai revealed Min Min in a pre-recorded video from his home. Due to the state of emergency Japan was under with COVID-19 spreading, Mr. Sakurai and his team couldn’t produce a normal reveal. Nevertheless, Nintendo made the reveal possible by sending him equipment.

Despite not being in-office, Mr. Sakurai still proceeded to showcase Min Min flawlessly. He revealed Min Min’s ground-based strengths and aerial-based weaknesses. We even got to see her in battle, while watching Mr. Sakurai display awesome Smash skills.

Personally, I love the addition of Min Min to Super Smash Bros. Ultimate. When I played ARMS, I mained Min Min because her agility was incredible. Not to toot my own horn, but I even won a few in-office tournaments with her. She’s a pretty sick fighter.

Min Min will be the DLC character in the Challenger Pack 6. This pack will be able to purchase for $5.99 and will release on June 29, 2020. If you own the Fighter Pass Vol. 2, Min Min will be included at no extra cost. Mr. Sakurai also revealed two new Amiibos based on previous DLC characters. Persona 5‘s Joker and Hero from Dragon Quest XI S: Echoes of an Elusive Age. They are both set to release Fall 2020. Mr. Sakurai did suggest that he wasn’t sure how many would be produced. Typically, I’m not a huge proponent for Amiibos but the high quality of the Joker amiibo has changed my mind. It’s definitely worth pre-ordering when available. Min Min and the rest of the Super Smash Bros. Ultimate Challenger Pack 6 releases on June 29, 2020 on Nintendo Switch.