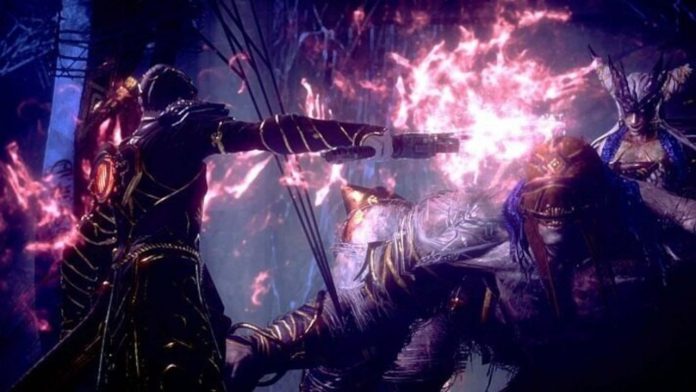 I love when games release an actual demo early so we can try the games out and get a feel for them before buying, but in some cases the games probably shouldn’t be shown off so early. Babylon’s Fall is a game that looks fantastic from trailers, but actually playing the game is a whole different story.

I was excited to get my hands on the game last week, the same day Elden Ring released, so I had something to pass the time while my copy arrived. Initial thoughts for Babylon’s Fall are quite depressing. I was excited for this game, I love Platinum Games and their play style, bringing that to a live service type game sounded exciting, but it seems like everything they do well was erased for some rushed live service micro transaction based title.

I mean lets start right at the beginning. I couldn’t even get into the demo, a product used to sell the full product, because my Square account wouldn’t verify itself. Note you can’t play this game without having a Square account, so you either need to start typing away with your Dualshock, or go grab a computer to ease some pain. I absolutely hated when Konami did this with Metal Gear, and I don’t see the point. I have a PlayStation account, link my PlayStation account to my Square profile and be done. Period. Anyway….

You get past that pain and the game absolutely blows you away with graphics from the PS3 era. It looks like total garbage, i’m not even going to play nice here. It looks like a PS3 era title that wasn’t finished. Hands in the opening sequence are stiff with fingers all locked together, textures on faces are brutal, and overall it looks like a poorly rendered game from the past. I even had my significant other questioning, “when did this game release? Is it an older game?” only to be shocked when I said “No, it’s not even out yet.”

In the character create screen we can see that the characters dont even have any anti-aliasing to support their edges. Everything has this pastel look to it, with textures that move with the camera, making everything look odd and out of place. The character create screen is also lackluster with very few things to select for anything beyond a few basic templates. It was a big shock to go from this to Elden Ring which literally lets you blend colors together and has pages of assets to choose from. There just isnt a real purpose to the character create screen because what little time you spend there gets immediately covered up by armor and helmets in the game.

The game itself is where I get a bit hesitant to call the game totally lackluster. Lets start with the bad. The level design is horrendous, again similar to PS3 titles, the game has linear corridors with very simplistic obstacles, followed by dungeon area’s, then repeats over and over. Platinum has been so great at making aerial puzzles and fluid combat between traversing levels, and none of that is apparent in this game at all. To top this off when playing with others it’s nearly impossible to search what little there is because a majority of players are just breezing on through to bosses. Once a player reaches a dungeon area it will teleport all the other players to the area, locking out any chests you didn’t open.

That isn’t the only bad thing, the game also has a really stupid idea of basically static images for cutscenes where characters sit around a table slightly moving telling a story. After every mission you get sent to the tavern and watch them talk to each other. Which wouldn’t be as bad if they moved a bit more, or had good voice acting. And I’m not a person that normally targets voice acting, but some of the characters in this game are as bland as can be. At one point a character is supposed to yell “Ahh!” and the voice actor literally reads it in a monotone voice with no effort at all.

One last gripe I have is that the game HUD is visually cluttered with unneeded things. On the top of the screen is a reminder of micro-transactions and your season pass status. The most annoying perk is your weapon selection for your special abilities follows your character on their back. It’s not that bad during combat, but constantly being there is beyond annoying. My character has two massive hammers that take up a good portion of the screen. They should disappear when not in use.

Now to the good and what kept me playing the game is the stellar combat. Platinum knows combat, that’s a given, and that’s literally the saving grace for this game. I loved the fluidity of combat and how each class has a different play style to them which will overall warrant your selection. The game also just updated so that dungeons will level with player count, which fixed the one issue I had in terms of enemies being too hard or too easy. Everything else is set up perfectly, the buttons you use, the way powers are implemented, everything feels so fluid and easy to grasp.

I feel like the game got a little restricted due to becoming a live service type game, so some of the slow motion and other features seen in trailers have been removed. That being said I walked away from the demo thinking “the combat was so good though!” and it’s so good that it kept me playing.

However this game feels like it has strong undertones in gameplay that somehow morphed into a pay to play, full priced entry, live service game. So it has strengths like the combat and environment, but overall feels like a really rushed live service with it asking for real money at every turn. Which isn’t good considering this isn’t a F2P title.

I’m hoping some of my gripes were simply due to this being a demo and the full game will open up more exploration, more combat types, and simply look better than a PS3 work in progress, but then again a demo is supposed to sell us on the full game….