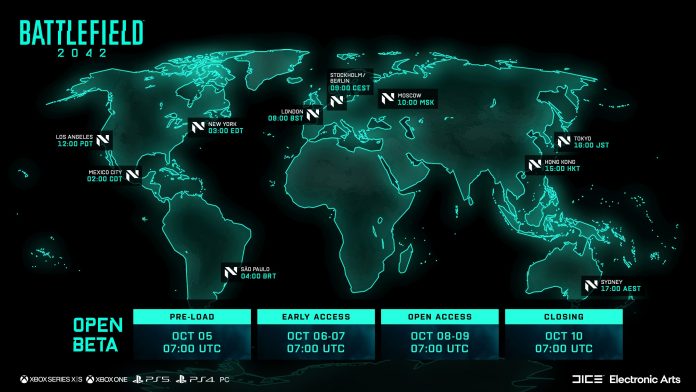 EA and Dice announced today that players will have the chance to play the open beta for Battlefield 2042 starting next week.

The open beta will run for all games from October 8 to 10. EA Play members will have the chance to play starting Oct. 6 and will be able to pre-load the game on the 5th.

During the Beta, participants will have a chance to jump into the franchise’s signature brand of All-Out Warfare as one of four unique Specialists each equipped with their own individual styles, specialties and traits. Players can step into the shoes of Boris, a Russian engineer who comes with a SG-36; Casper, a South African camouflage and long-ranged attacks expert; Falck, a skilled German medic who specializes in Support; and Mackay, a Canadian outdoorsman and nomad who is equipped with a Grapple Gun.

Set in Kourou, French Guiana, the Battlefield 2042 Orbital map lets players experience a race against time in hostile conditions as they battle around the site of an imminent rocket launch. Sectors found in this map include the Assembly Building, the Launch Platform and the Crawlerway connecting the two. During a Conquest match, players will experience Battlefield’s signature dynamic maps featuring an automated rocket launch sequence, zipline traversal between lightning towers, vehicular combat in adverse weather, including an unexpected tornado event altering the flow of battle, and much more.

In addition to the news about the open beta, developers dropped a blog post on game progression and cosmetics in a blog post.

Developers said the approach for earning XP is focused on rewarding players who play the objectives and stick with their teams/squads all the way through the end of the match in addition to kills, assists and other support actions.

Developers said the max player level garnering rewards is 99, but gamers will have the chance to continue leveling through S-Levels, starting at S001 and ending at S999.

“While there are no further rewards tied to the S-levels, they are the ultimate way to show off your veterancy on the Battlefield!” developers said.

Every player levels comes with new rewards that will include weapons, gadgets, cosmetics and more. Players will have access to a diverse set of rewards aimed at discovering several different playstyles.

Unlocked hardware has its own unique mastery-based progression system that gives players new unlocks based on various objectives i.e. score enough kills with the M5A3 assault rifle to unlock a new scope or for a vehicle, gain new equipment as you use it to accomplish goals like capturing points. Certain milestones will unlock new cosmetics and a Mastery Badge that can be used to decorate Player Cards.

“We’re excited about Player Cards as a way for you to self-express your identity and showcase your achievements across the game. With such a wide range of different play styles from our Battlefield players, we can only hope we have enough variety of awards to match that creativity of play! We’re looking forward to seeing the unique customized Player Cards you’ll come up with”, Design Director Feras Musmar said.

Battlefield 2042 will feature cross-progression so you can pick up and play on whatever platform players want as long as they’re using the same EA account.

“While there are a few limitations to cross-progression we want to make you aware of, such as Special Edition cosmetics, the Digital Artbook & Soundtrack, unspent Premium Currency and pre-order items not carrying over, we’re excited about giving you the freedom to play and progress wherever you choose to play,” developers said.