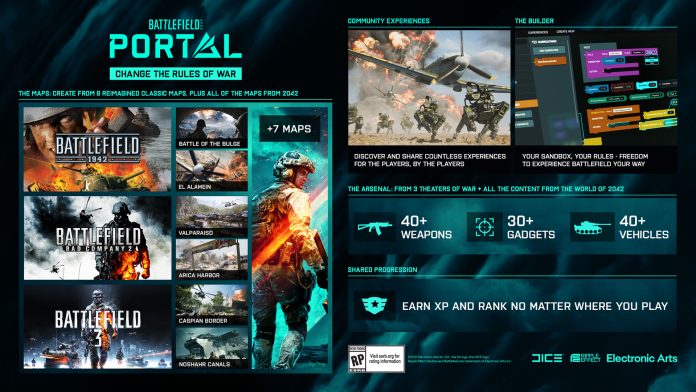 Battlefield Portal will bring an all new experience to the franchise and players. Described as a “community-driven platform” that will allow players to craft their own unique Battlefield experience. From setting up custom modes, a logic editor, and more, you’ll be able to use various creative tools to craft the specific gameplay experience you want.

It sounds, and looks, pretty damn awesome. While I’m not a big shooting game fan, the potential here is certainly neat. For long time fans of the franchise, getting the chance to play around in this world (and classic maps) is definitely a big deal. More details on Battlefield Portal below:

A first for the Battlefield franchise, Battlefield Portal is a community-driven platform designed to offer a huge variety of imaginative experiences by giving players the tools to set their own rules and build their own definitive Battlefield experience – and share them with other people. Battlefield Portal will be available at launch as one of three core Battlefield 2042 experiences. In addition to Portal, players will also have access to All-Out Warfare, which includes the next generation of fan-favorite modes Conquest and Breakthrough, and Battlefield™ Hazard Zone, the all-new, high-stakes squad-based experience set to be revealed closer to launch.

In Battlefield Portal, players will be able to use a powerful creation suite that includes Settings, custom modes and a Logic Editor. This will allow the players to not only create, but share and discover unexpected battles filled with the weapons, vehicles, equipment, and more, set in the locations from Battlefield 2042, and iconic, fan-favorite maps from Battlefield 1942, Battlefield Bad Company 2 and Battlefield 3.

These creative tools give players the chance to go beyond what they’ve experienced in any Battlefield game previously and create unique modes, such as 1942 versus 2042 matches, knives versus defibrillators battles or even a hardcore team deathmatch showdown. The customization options available in Battlefield Portal allows players to let their imaginations run wild and put the rules of war in their hands.

“Battlefield Portal is truly a love letter to our passionate and long-time fans,” says Justin Wiebe, senior design director at Ripple Effect Studios. “We’ve created a set of tools that really gives the community the chance to create their own signature Battlefield experiences, while also bringing back these iconic Battlefield classics for our veteran players to revel in and our new players to experience for the first time.”

Battlefield Portal will include all content from the world of 2042, along with six additional maps from three of the franchise’s most popular titles, along with additional vehicles, weapons, gadgets, factions and classes from each respective game. This content includes:

Classic Factions will be making their return in Battlefield Portal as you remember them, allowing you the ability to mix and match between 7 different armies from the Classic titles as well as Battlefield 2042’s Specialists

Armies such as 1942’s UK, US, and Germany as well as Bad Company 2’s US and Russia will feature exclusively in Battlefield Portal

The return of Factions to Battlefield Portal, we will also mean that we are bringing back soldier archetypes as you know them to be within their relevant titles. As an example, Battlefield 3’s Assault, Engineer, Support and Recon roles make their return in Battlefield Portal

Along with the content available at launch, Battlefield Portal will add all of the new content introduced to the game through Battlefield 2042 live service. Battlefield 2042 intends to launch four Seasons in the game’s first year of live service, including four battle passes, four new Specialists, new locations, vehicles, weapons and more fresh content.