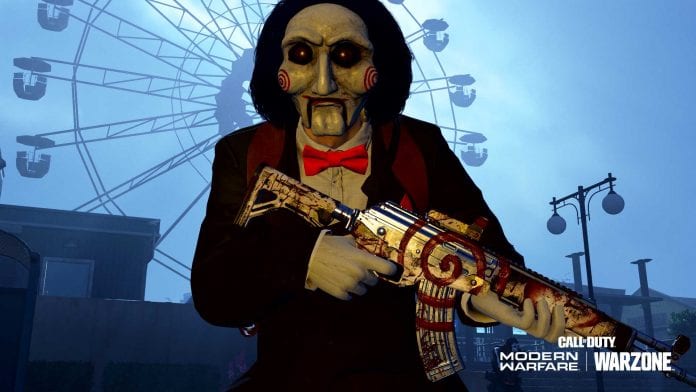 Two iconic villains from popular horror franchises SAW and Texas Chainsaw Massacre are dropping into Verdansk in Call of Duty: Modern Warfare and Warzone to haunt players for the Halloween season.

Developers made the announcement yesterday and released the update for the first-ever in-game Halloween experience late last night.

Players will have access to new weapons and, for a limited time, a Trick-or-Treat rewards system, “where special Supply Boxes may either contain frights or frighteningly good blueprints and personalization items.”

“As Halloween draws near, a squad of operators drops in for what seems to be a normal infiltration into Verdansk… though there’s been back-channel chatter about some unexplained and odd occurrences across the remote areas of the map. Operators have been briefed about reports concerning a serial killer who wears his victim’s faces on his own. There’s scattered intel about strange sounds emanating from various locations within the warzone; and not least the piercing, creepy laugher of a ventriloquist doll…

It isn’t long before hell breaks loose: One by one, the squad is brutally picked off until there is just one survivor, who after a confrontation with Verdansk’s own urban legend, vows to return under the cover of night and avenge his brothers in arms.” “Be ready to don the garb of Billy the Puppet in the SAW bundle and take an enemy operator’s choice to live or die in his own hands. Along with the “Billy” skin for Morte, the SAW Bundle features The Phlebotomozier Lethal Equipment piece, a special throwing knife will drill into your enemies upon impact. And oh yes, there will be blood… if it lands on target.

The Texas Chainsaw Massacre bundle features the iconic crazed killer Leatherface. The legacy of this cannibalistic maniac, whose mad and macabre reign of terror in 1974 was unlike anything ever seen before, is set to live on through the “Leatherface” skin for Velikan, as well as the “Family Heirloom” LMG blueprint, complete with a unique Stock attachment that allows an operator to wield the weapon like a chainsaw. As players are re-introduced to the malice of Leatherface, a clue as to what happened to the notorious murderer may even appear to those with a keen eye.”