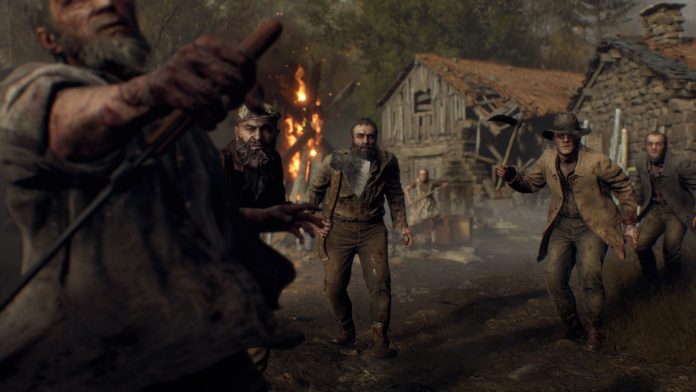 Yesterday, Capcom made fans dreams come true by not only showcasing gameplay from the upcoming RE: Village GOLD Edition and its Winters Expansion. But by also showcasing RE 4 Remake gameplay and more!

Since it’s announcement, fans around the globe have been begging for more details on the upcoming Resident Evil 4 Remake. We got so much information on it, RE: VERSE, RE Village GOLD Edition, and more it’s best to just list it below with the trailer and let you drool over the details as we did! Here’s all the info:

Capcom announced that not only will the Gold Edition of RE Village launch October 28th, but the Winters DLC and a new third-person mode will be available on launch day! There is also a 60 minute demo available now on all platforms for anyone that wants to try out the upcoming third-person mode before launch.

After being delayed for some time, RE: VERSE is finally launching October 28th along side RE Village GOLD Edition. It was also announced if you already on RE Village, you can gain access to an early play period from October 23rd to October 25th.

The game will be playable in third-person and kept as close to the original as possible. Capcom did state that many new elements have been added to the game like location re-design, new combat, a new parry system, and much more! Our EIC Jordan listed a bit more details on the game, as well as a new story trailer in his post!

So overall, I can say with a clear mind that we have a lot to be excited about from Capcom! Below I have link my full reaction video of the event as, make sure to check out my initial reactions, our review, previews, and more right here at Cinelinx!