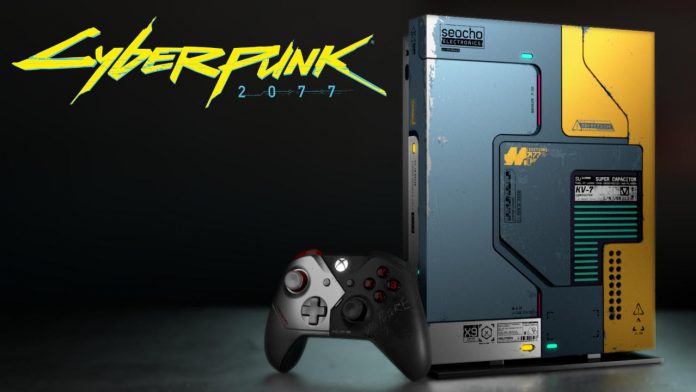 The last themed Xbox One X before the Xbox Series X has been announced. CD PROJEKT RED (Witcher 3: Wild Hunt) and Microsoft partnered up to design this slick new Xbox One X. See all its technological glory in the announcement trailer below.

The bad news is, there are only going to be 45,000 units available in select locations. So, you’ll want to get yours as soon as pre-orders are open. If you can’t wait until June 2020 for this bundle’s release or you’re worried you won’t be one of the lucky 45,000, you can still get your hands on Cyberpunk 2077-themed Xbox gear today. The Cyberpunk 2077 Limited Edition Xbox One X comes with a breathtaking controller, inspired by Keanu Reeves‘ character, Johnny Silverhand. It’s on sale for $74.99 and is available today. As with all Xbox One controllers, the new controller is compatible with the Xbox One family of devices and includes a 3.5mm stereo headset jack and Bluetooth technology for gaming on Windows 10 PCs, tablets, laptops, and mobile devices.

That’s not all, though. Microsoft seemingly went all-in on all things Cyberpunk 2077. The tech giant also announced a Cyberpunk 2077 Johnny Silverhand-themed SteelSeries Headset ($109.99), Seagate Game Drive (up to $149.99), and a Limited Edition Xbox Pro Charging Stand ($49.99). See them below and to read more on them, click here.