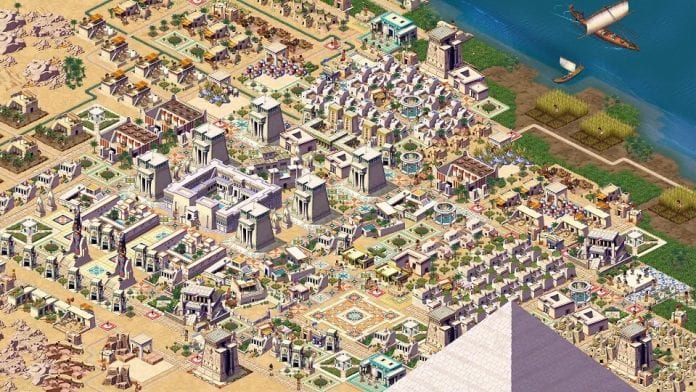 Next year, you’ll be able to rule the Nile, build monuments to your greatness, and expand your Empire with Pharaoh: A New Era.

IGN has revealed a the return of Pharaoh (a city builder game from 1999) during their Gamescom showcase. A New Era will remaster the title with a stunning new animated look, while still capturing all the content and gameplay from the original:

Publisher Dotemu (Streets of Rage 4, Wonder Boy) and developer Triskell Interactive (Lethis series) announce the return of one of gaming’s best historical city builders ever created, Pharaoh. Revealed today during Gamescom 2020, fans will be able to rule the Nile in 2021 on PC.

First released in 1999 by Impressions Games and published by Sierra Entertainment, Pharaoh puts players into the role of an Egyptian ruler. Plan and execute the construction and management of cities as well as settlements in ancient Egypt and oversee every aspect of life within your borders. Juggle resources and strategize the administration of your empire to ensure that citizens are fed, employed, healthy and protected.

Pharaoh: A New Era is being developed with all-new code and, like a good city builder, from the ground up (see what we did there?) from Dotemu and Triskell Interactive brings all-new 2D graphics with brand new UI and improved mechanics to the game, and will include the 2000 expansion, Cleopatra: Queen of the Nile. Packing more than 100 hours of gameplay, Pharaoh features 53 missions and a full map and mission editor, making the classic an immediate must-have for 2021.

Pharaoh features two modes of play, Campaign and Free Build. In campaign mode, players focus on establishing cities during different periods of ancient Egypt, building up trade centers, grand cities, tombs and pyramids, and fabulous monuments for various ancient Egyptian leaders. Players operate in six periods of ancient Egyptian history, with the first period serving as the game’s tutorial. In later periods, players get a choice between two missions – one being a peaceful mission, the other being more military in nature.