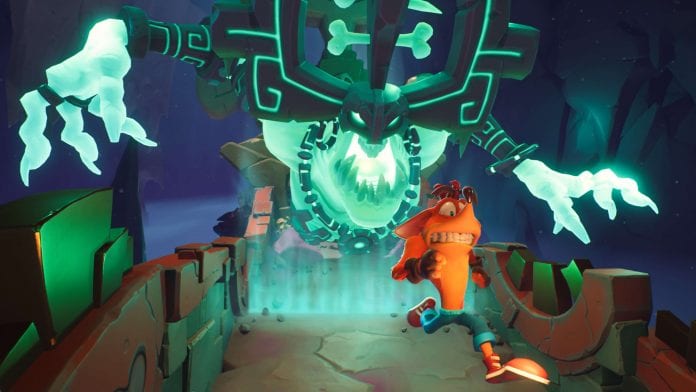 It’s been over ten long years since there’s been a new Crash Bandicoot game. The last game, Crash Bandicoot: Warped, released in 1998 and since then then-developer Naughty Dog has moved on to different stuff you might’ve heard of. Thus, leaving Crash Bandicoot fans left feeling helpless for a sequel to the beloved trilogy.

Rewinding time back to the end of Crash Bandicoot: Warped, Crash Bandicoot 4: It’s About Time picks up after Neo Cortex, Dr. N. Tropy and Uka Uka were last stranded on a distant planet. After decades of fruitless attempts, the trio finally make their escape, ripping an Evil-Scientist-sized hole in the fabric of space-time in the process. Now all that stands between them and total dominion over the multiverse are two fuzzy marsupials from N. Sanity Island.

Crash Bandicoot 4: It’s About Time is an all-new original story from Toys for Bob. As the synopsis above says, it takes place after the events of Crash Bandicoot: Warped. With the three nefarious villains threatening space-time, It’s About Time will introduce four Quantum Masks, the guardians of space and time. Using their unique abilities, Crash will be able to bend the rules of reality. So far, Activision has only revealed two of the four, Time and Space.

The Time Mask has the unique ability to slow everything down. Meanwhile, the Gravity Mask enables bandicoots to platform upside down.

Notice how the above line says “bandicoots” plural. That’s because Crash Bandicoot 4: It’s About Time will allow players to play as either Crash or his sister Coco. That’s not all, though. As the trailer shows, Dr. Neo Cortex will also be playable for the first time ever, adding his own twisted perspective to the game.

“Our teams have delivered two awesome remastered Crash Bandicoot experiences and the community passion for the series continues to be incredible.  Now it is time to turn the page and give players something entirely new,” said Rob Kostich, President at Activision. “Loyal fans have been patiently waiting to see the journey continue for their favorite marsupial, and we’re giving players the completely new experience they deserve with Crash Bandicoot 4: It’s About Time.”

Crash Bandicoot: It’s About Time will release on October 2, 2020 for the Xbox One and PlayStation 4 for $59.99. Pre-ordering is available now.