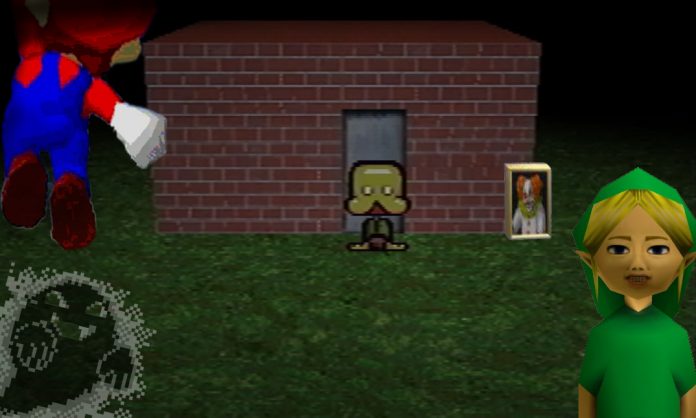 To help get in the Halloween spirit, I thought it’d be fun to take a look at some of the creepiest urban legends that have permeated the gaming world.

As with just about anything that’s formed a larger part of our culture, the history of video games have seen its fair share of strange, and downright creepy, urban legends pop up. Some began as whispers on the school ground (not unlike those secret codes from your friend who’s uncle “totally” works at Nintendo), while others have grown from various places on the web.

Some are as simple as trying to find secret game content (from a free-roaming Bigfoot to the fabled “nude codes” of old), while others have a decidedly more sinister feel to them. Today, as we look ahead to Halloween, I’ll be sticking to some of the spookiest ones I’ve found which have stuck with me for a long time…

One of the longest running Urban Legends about gaming around, deals with the original Pokemon titles and the “Lavender Town Syndrome.” The story is fairly straight forward and was initially passed from schoolyard to schoolyard before becoming a prominent story online. The legend here is the the original music players encounter in Lavender town (a spooky area all its own), ended up driving kids who played it mad; some even going so far as to kill themselves.

It’s a creepy enough story, but it’s been around for a long time. Over the last few years, however, a new twist on the story has popped up, adding a new wrinkle to the legend and growing into it’s own story: Come Follow Me.

This urban legend follows one of the detectives in charge of investigating the Pokemon related suicides. As he uncovers a deeper plot and dangerous secrets about the game’s mysterious influence, more and more bodies begin to pile up. Eventually, he begins to hear the voices of the children who died because of the game, who implore him to “come follow me.”

Haunted by those voices, the detective himself is driven mad by the very investigation he became obsessed with solving. There’s a lot going on in the story, and it’s a fun twist with plenty of spooks. Be sure to read the full Creepypasta (where it originated) for the whole story.

Sunny The Clown (The Sims)

This urban legend sprouted up from The Sims: Livin’ Large expansion, and puts the focus more on a clown. Yes, as if things couldn’t be creepy enough, this has to center on a clown. Sunny the clown to be specific who originally appears in the first game and has more recently returned for The Sims 4.

The NPC serves as a visitor who can come to your home. His intent is to cheer up your resident Sims, though he often has the exact opposite effect. Even worse, he’s a pain that’s almost impossible to get rid of once he shows up. In this spooky tale, one player got so tired of Sonny he managed to get most of the town members to slap him around/insult him in order to try and force his departure. When nothing worked, he set about creating a house-fire, cutting off the exits and help eventually resulting in killing off Sonny from the game…

Suddenly, the game wouldn’t work right, and the player found himself haunted by mysterious in-game messages (a countdown) and strange occurrences that couldn’t be explained. Pictures of Sonny popping up on the Sims’ TV, in ads throughout the city, places they shouldn’t be.

When the mysterious countdown ended, the player found his game invaded by a vengeful Sunny the Clown, who mercilessly stalked his virtual Sims. One by one, the entire town were disappeared, each take-down hammered home by weird image glitches and sudden music. The player couldn’t stop the massacre and ultimately found his computer filled with images of the burned up, demonic clown.

This is an old one, but still incredibly good and revered as one of the most pivotal gaming Creepypastas to ever come around. The story here is relatively, simple in which an unsuspecting gamer finds himself in possession of a haunted N64 cartridge.

Having purchased what he assumed to be a copy of The Legend of Zelda: Majora’s Mask, the gamer discovered the cart still had save data from a previous owner, “Ben,” downloaded onto it. After firing up a new game, things began to get weird with strange glitches, unusual sound bites, and much more.

Things got even worse as the player attempted a well-known “fourth day” glitch, which caused him to have encounters with in-game characters he shouldn’t normally have had. Things began to get super spooky as the playable character on screen began to suffer horrific deaths that shouldn’t have been possible.

The BEN save file seemed to be causing problems, but also, strangely, refused to be deleted. After trashing the save data, the gamer would return to the game the next day to find the file inexplicably back, with his adventures INSIDE the game getting stranger and stranger…to the point of it apparently communicating with him.

The tale of this haunted cartridge (which also involves the tragic death of a kid) is a long one, but super detailed, and even comes with several videos to go with it. If you’re looking for something to give you the chills this month, definitely read up on the whole story.

From one haunted Nintendo 64 cartridge to another, this tale is one of MANY that have cropped up around the iconic, portly plumber. The legend starts, as many do, with a gamer finding a used copy of what he believed to be a beloved childhood game (Mario 64), only to find out something is definitely wrong with it.

While it loaded up like a typical copy of the game, the troubles began when the gamer and his girlfriend attempted to delete the previous save files. The first few deleted just fine, but when the couple tried to erase the first save slot, the game went nuts. An ear-piercing shriek emitted from the TV’s speakers, as though the game itself was screaming.

Upon firing up the game after turning it off, they were shocked to find the game file still in place, this time showing an ominous 66 Stars complete next to the save file (which had previously been blank). Curious, they decided to play the file on there, but when they entered the game world, they found a very different Mushroom Kingdom.

While the castle was still in place, the world itself was noticeably wrong. Gone were the bright colors of the game, and replaced with a darkened sky, and rust-red spatters covering the castle walls. Before making it much further into the game, they were suddenly confronted by a body dropping down. The body of Mario, hanged and obviously tortured, greeted them with eyes and mouth sewn shut.

Things only got worse as the gamer decided to keep playing after his girlfriend had gone to bed (and begged them to toss the cartridge out). The game continued to find new ways to torture Mario—and other characters—in gruesome detail, before ultimately showing a new person taking Mario’s place…the gamer himself.

It’s a longer tale (where the game world horrors begin to bleed into the real), but one that manages to continually up the creepy factor. It remains one of the Mario-related urban legends that has stuck with me the most and I encourage you to check out the full story to get your spook on.

Petscop makes for an interesting tale that came about as a creepy YouTube series of Let’s Play videos based on a single game: Petscop. The cool thing with this urban legend, is that Petscop isn’t a real game, and doesn’t actually exist. Unlike the other tales on this list, it isn’t centered around something real, but instead fabricated for the sake of the story. That doesn’t make it any less compelling, though.

Petscop is setup as a 90s era PlayStation 1 video game that the person behind the YouTube channel (supposedly someone named Paul) happened to “find.” The game starts off simple enough, looking like any polygonal game of that era, where the character goes about collecting items and such. Further playthroughs, however, brings about disconcerting changes.

At one point, Paul finds himself in a strange area of the game, a grassy expanse surrounded by darkness. Exploration uncovers a child’s grave and even a crying child hidden away in a cellar. Certainly not the usual thing you’d expect to find in an older video game. It’s strange, but seems to be part of the game’s puzzle-solving nature…

Soon, however, Paul discovers that the clues he finds in the game have real world links to things in his own past. During the playthrough of Petscop there is a greater mystery being uncovered pertaining to the “real” death of a childhood friend, a missing child, and much more.

It’s a compelling, and altogether creepy YouTube series, that has spawned a community who believe they’ve found even more hidden clues to a larger mystery surrounding the story. It’s interesting stuff and fun rabbit hole to dive into when you’re up later at night.

The internet is rife with creepy video game stories, but these are the ones I thought were most interesting and able to give you the chills. Be sure to hit the links I’ve included for the more complete stories to give you nightmares this month.

Which video game urban legends have scared you the most?