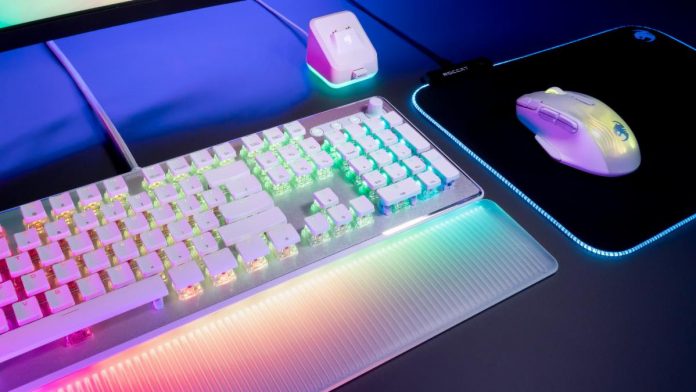 It’s almost the end of 2022, but before we ring in the new year, we look back at some of the tech released this year. When it comes to reviewing new gaming gear, it can be a little tricky. Sure, it’s easy to see the pros and cons of a product straight out of the box, but how can you review longevity? In this review series, I’m discussing some products I’ve been working with for several months to see how well they’ve performed—in addition to the features they have.

In 2022, the PC arm of Turtle Beach, ROCCAT, had themselves a busy year in both developing and releasing new products for players. Impressively, the tech company was able to roll out not one, but two new gaming keyboards: The Vulcan II Max and a mini version with the Vulcan II Mini.

While they come from the same tech family, the two Vulcan brothers are not the same product. For one, the Vulcan II Max has over 100 grams on its little brother, the Vulcan II Mini, with a max weight of 678g. Plus it sports a sleek, sandblasted aluminum finish. Not only did I appreciate the aesthetic of the finish under the beautiful AIMO lighting, it provides the kind of durability you’d want in a high-quality gaming keyboard.

Keeping with the lighting, both the Mini and Max versions of the Vulcan II have Dual-LED Smart Keys, which is pretty handy when you’re switching between functions and customizing smart keys. However, where the Vulcan II Max does it better is with the transparent palm rest. Previous gaming keyboards have sported a harder palm rest that doesn’t add much to the overall aesthetic. However, the Vulcan II Max comes with a transparent, seemingly-silicone palm rest that is not only comfortable, but it also extends the lighting out further. When the palm rest is attached, the light shoots out from the keys all the way down to your palms and it’s really quite cool to see.

That said, bigger doesn’t always mean better. When traveling with the Vulcan II Max, I found that the big brother Vulcan wasn’t as easy to move as its smaller sibling. In contrast, the Vulcan II Mini is the perfect keyboard for an on-the-go lifestyle. The Mini is a compact version of the Max Version and makes travel so convenient. At about 500g and a detachable USB cable, PC players have the capability to bring high-quality gaming tech anywhere they go.

When packing my gaming laptop, the Vulcan Mini II fit snugly in my laptop bag, backpack, duffle bag, and all manner of containers. You’d think that a mini keyboard such as this would have durability concerns moving from place to place. However, no matter the container or other contents within, the Vulcan II Mini remained completely intact without cracking, scuffing, or any performance issues.

So in the sibling rivalry for keyboard supremacy, the Vulcan II Mini definitely takes the cake when it comes to portability. Meanwhile, the Vulcan II Max edges out the Mini in design with its sleek, sand-blasted aluminum finish. However, you can’t judge a gaming keyboard by its frame. No, what makes a high-quality gaming keyboard is what’s inside.

What sets the Vulcan II Max and Mini apart from competitors are the ROCCAT Titan II Mechanical Switches. These switches are designed for smooth keystrokes and optimum actuation. In the months I’ve had with both the Max and Mini, I found that both succeeded in this venture. Between my playthroughs with the Mini and Max, I played games like Vampire Survivors, Destiny 2, Final Fantasy XIV, Fortnite, and World of Warcraft. In each game test, the keys provided swift actuation and I was able to compete as fast as my fingers would allow. No matter if I was shooting, casting, or exploring, both Vulcan versions never halted my progress; nor did they hurt my game. If anything, there were times where I felt quicker on the draw than my opponents, especially in games like Destiny 2.

Many gaming keyboards tend to work perfectly for a few months but after a few months of use, tend to start degrading. There starts to be “sticky” or unresponsive keys, along with oils from fingers causing permanent smudge marks on the surface so that letters start to be erased.

After months of testing both products, I can happily say neither Vulcan II model showed the kind of degradation I’ve seen in the past. Even now, as I write this dueling review for both keyboards, I’m writing it on the Vulcan II Max with no problems at all. I haven’t had a moment where I’ve had to slam the key multiple times to get it to acknowledge the letter that I want.

That doesn’t mean that it won’t eventually happen, but it does mean that the 100 million keystrokes that ROCCAT promises, is seemingly there. Of course, I can’t really count 100 million times I’ve pressed the keys, but I imagine with how much I write and game that I’ve gotten up there or close with both keyboards.

As for permanent smudge marks, there hasn’t been much of those on either keyboard either. Primarily the space bar and a few keys have some glossiness to them, but throughout the months I’ve tested both of the Vulcan keyboards, neither the Mini nor Max look much different from when I first opened them. That’s a testament to the durability of both products. While smudge marks aren’t the end of the world, sometimes you don’t want to see that glossy sheen on your space bar.

So what’s the benefit of the Vulcan II Mini? Above all, portability. It’s lightweight and very easy to take on the go. I would still get some sort of bag or case for it, but regardless it made every journey I took it on and provided high-quality gaming experiences everywhere I went. Plus, the lighting made it very aesthetically pleasing. Additionally, it has the capability to save settings and profiles so that you never have to bother with setting up personal settings over and over again. It’s literally the Max version but at 65% of the size.

As for the Vulcan II Max, it’s a powerful, sturdy gaming keyboard. I mean, it’s a tank and it looks like it. With the sandblasted finish and wide frame of the keyboard, the Max is as durable and powerful as it looks. It’s definitely not as portable as the Mini, but it’s not the type of keyboard you want to take on the go. This one stays home and serves as your control hub for your PC. It controls volume, pauses videos, skips ahead, saves profiles, and has a massive amount of customizability with its keys and lighting. Plus, that palm rest is sweet. With the Vulcan II Max, I felt in control of everything; my pc and the games I was playing.

So which one should you get? The Mini is $199.99 and the Max is $299.99. Both are absolutely solid gaming keyboards that are very smooth, fast-processing, and enjoyable to both in daily use and in competition. So really, it comes down to you and your preference. Do you prefer smaller keyboards or larger ones? Are you more of an on-the-go gamer or will you do most of your gaming at home? For me, I preferred the Max over the Mini, mainly because I prefer bigger keyboards, but the Mini is no slouch at all. Whichever you go with, if you decide to get a Vulcan II keyboard, you’re not going to be wrong.