When Konami said they were going to continue the Metal Gear franchise, there were many routes they could have taken. They could “finish” MGSV with the missing chapters, which was hinted for an upcoming re-release that was leaked. Another possibility was simply revamping the old games with the new engine (something Konami was already doing for their casino machines), or they could continue the series and see where a new creative director would take the franchise.

No matter how you spin it, people were going to keep their eyes on it. Personally I was planning to give Konami a few games as buffer where I’d give them a chance. I’d play the first few games, give it slight hope, and perhaps, if they were good, continue my Metal Gear love. I’m obviously a huge fan of Kojima, like many people are, and continuing without him was scary. Then Metal Gear Survive dropped and those fears exploded.

When Kojima revealed this new game, Death Stranding, I got exactly what I expected: some dark twisted story-driven trailer with so many odd things about it you can’t help but have some interest. That’s Kojima for you and his first game for his new studio matches what you’d expect. Metal Gear Survive on the other hand took the beloved franchise and did nothing with it.

The trailer has almost nothing to do with the series other than some destruction (perhaps a metaphor?) and showing off Mother Base from Ground Zeroes. That’s it. Everything about the trailer was a Call of Duty-esque bromance with zombies inspired by Resident Evil…. It looks bad, I’m not even going to be nice, it looks terrible. If it were some random game mode tacked on to MGSV I think it could get away with it, but a standalone product? Yeah…

Yet after watching the trailer multiple times and asking “wtf is this?!” every time, I thought to myself….what if Konami did this on purpose? Perhaps I’m giving Konami too much credit, (this is the company who swapped to mobile endeavors and coin gambling machines), but what if they were playing it smart? Fans are keeping a close eye on the Metal Gear series and chances are, regardless of what the first post- Hideo Kojima game turned out to be, they’d hate it.

Maybe Konami came to this realization and simply tossed together a basic game to ease the crowd. If they had re-released HD remasters, it’d be hated and called a “money grab.” If they continued the series, it would have been hated and fans would claim the story is ruined. So what they did is basically just make a spin-off arcade title, threw it together quickly, and let that hate train roll in.

There is really no other explanation for what they did. Where do zombies come from? Portals? Things that never existed in this franchise all randomly appear for a one-off side quest? No, it’s a barrier. The game isn’t even a full retail release and will instead be priced “around $30” and isn’t being marketed as some big new adventure. It’s using assets from MGSV, and core mechanics of co-op zombie games that came before it. This should have been just an expansion, DLC, for MGSV, but instead Konami decided to call it a new game. The trailer alone is as cookie cutter as you can get with stereotypical characters, and oh boy a giant brute at the end….

With how much emphasis Konami puts on branding, it makes no sense to ruin their strongest one. Well, PES( Pro Evolution Soccer) might be a bit stronger, but Metal Gear is being branded along all their other adventures. Their first casino machines are using Metal Gear branding. So one would assume that Konami would want this brand to remain strong and be very careful not to damage it, but Metal Gear Survive being a serious adventure says otherwise.

For all I know this is truly just a quick money grab and nothing more. Who knows what the logic is behind it, but it could also be a well-played title that leads to something else. (Hopefully not more zombies!) Konami doesn’t have a strong track record of continuing franchises after the main creator left, Silent Hill anyone? So the hope that Konami wasn’t actually serious about this one is very thin.

Overall Konami had two options. They could have made a really good Metal Gear title. There is plenty to work with from the existing franchise and so many places to go that it would be hard to actually make something bad. (Unless you turn it into a Resident Evil knock off….) So they could make the game, make it good, and say “see, we don’t need Kojima!” They of course will still get hate for it, but it’d be a good game to give fans a bit of promise. But they didn’t. So option two was to make something creative, but low budget, toss it together and let all of the haters….well hate it. It’s a low cost, high reward adventure. If it doesn’t sell, oh well, Metal Gear remains in the headlines. If it does sell, well congrats you just made a cheap alternative milk.

My reaction to the trailer was basically “I KNEW IT! I knew they’d screw it up!” but if Konami is playing it smart they knew fans like me would have that reaction no matter where they went. On the flip side Konami also probably thinks they can throw “Metal Gear” on a trash can to get you and me to buy it…. hopefully I can resist.

Either way I feel like this is a missed opportunity to perhaps explore a world filled with enemies inspired by “the Skulls” found in MGSV, one of the more creative enemies you come across. 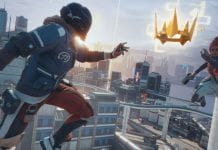