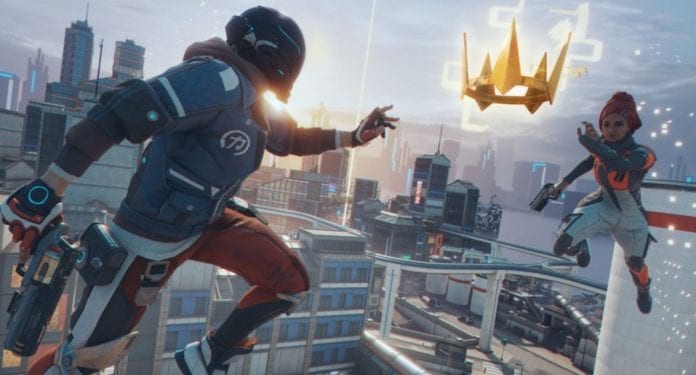 A couple of weeks ago, Ubisoft introduced the world to their new battle royale game, Hyper Scape. The trailer featured tons of verticality and mouth-watering gunplay, all within the confines of a vibrant Ready Player One-type world. Thankfully, along with its reveal was a PC Beta for all to enjoy.

These are our impressions of the Hyper Scape PC Beta.

What really drew me to wanting to play Hyper Scape was how unique this Battle Royale is. Unlike other battle royales on the market, the core feature of which all gameplay is based around is verticality. Sure, battle royales like Fortnite, CoD Warzone, Apex Legends, and so on allow players to build/climb structures to attack from above, but it’s not the core gameplay feature. Ubisoft wants you to have epic firefights atop roofs, bridges, and every other structure available.

This is the case in a variety of ways. For starters, Hyper Scape automatically gifts players with a double-jump and an uber-sensitive climbing mechanic. Mixing these two mechanics gives this urban battle royale game a parkour element, that’s one of the highlights of the game.

Another highlight is the unique way in which players drop into the city. Rather than a dropship or party bus in other games, Hyper Scape immediately launches you in a pod. You can go wherever you want in that pod and at high speeds. This allows players to get into the game quicker. That said, it also easily allows squad members to separate, which can put teams at a major disadvantage.

Truth be told, I died a lot in the Hyper Scape beta for reasons I’ll get to later. While it’s never fun to die as frequently as I did, it gave me the opportunity to get familiar with the respawn mechanics. Since the genre got big, I’ve played a LOT of battle royales. I’ve maintained for some time that I believed Apex Legends approached respawning the best out of all of them. That is, until Hyper Scape.

Once you’re taken out by your opponent, you immediately become a static-y ghost of sorts. While in this state, you can follow your teammates around and point out objects and enemies to help them out. This can be a great strategic tool, as anyone still alive in the game can’t see you. Then, when the opportunity arises, you can respawn using points that pop up from enemies that have died. Respawning takes some time, but it’s a very smooth, smart approach to getting back into the game.

If you’re lucky to get to the end of the game, Hyper Scape has a really cool end sequence. For starters, when zones are closing, the areas begin to decay. Then, when there are about 3-4 squads left, a crown appears in a random location. With the entire environment decaying around you and enemies attacking each other to get to the crown first, it made for an awesome rush unlike anything I’ve felt in a battle royale game.

As I do with every Beta hands-on impression, I have to start with a disclaimer. Since this is a beta, the issues I have are likely something Ubisoft Montreal is in the process of addressing and will have corrected at launch. These are are just issues I experienced during my matches.

Unfortunately, while Hyper Scape delivers a completely new battle royale experience, it falls short in a lot of aspects.

For starters, I wasn’t a fan of the weaponry. Hyper Scape offers a ton of variety in ways you can attack opposing players. Furthermore, the weapons you pick up can be fused with guns of the same brand found on the battlefield. Doing so, allows you to upgrade weapons. You can also do this with abilities, which is honestly really cool.

The only problem, there is rarely an opportunity to find the same weapons in your hands on the streets. That’s because the battlefield gets picked apart quick by the 30+ squads. Therefore, oftentimes players find themselves with the basic version of weapons all the way up till the end. In the countless games I played, I was only able to upgrade/fuse weapons one time in squad mode. ONE. There were more chances in solo games. Nevertheless, as a major feature of the game, that’s a major flaw.

Another issue I had was how there wasn’t a clear indicator on the screen of where you needed to go when zones were decaying. If there is an indicator on the HUD, I never saw it and it became quite annoying to have to constantly open up the world map to avoid running into a closed zone. At least other battle royales have a map that labels precisely where you needed to go.

As I mentioned before, I died a lot and I was part of several teams that kicked the bucket early. In battle royales, this is common and completely fine. However, what isn’t great is not being able to watch the rest of the match. I absolutely love doing that in other battle royale games. Watching others play until the end has helped me learn new tips and tricks to become a better player. Plus, it gives me a certain goal to strive for. Instead, once your team is eliminated, Hyper Scape says “Bye. Sayonara. Thanks for playing! Want to play another game?”. I never got to see what happens after my elimination.

One last issue I had is how limited the voice tracks were. For certain notifications, there was no variety. When I pinpointed an enemy, my character would say the same thing every time. The same thing would happen when someone would come revive me. Just the same message every time. It became very annoying. This is likely something they’ll add to in the main game, but it was not pleasant in the beta.

Overall, Hyper Scape is a very ambitious, promising new battle royale. However, there are a ton of kinks Ubisoft will need to work out before it’s even in the same caliber as Fortnite, Apex Legends, Call of Duty: Warzone, and so on. As it stands now, it’s not even close.

It’s got the right environment, the right recipe for success, but it needs to retool some weapons, increase the customization and voice tracks, and allow people to watch the games. Then, I think Ubisoft could have something really cool in Hyper Scape.