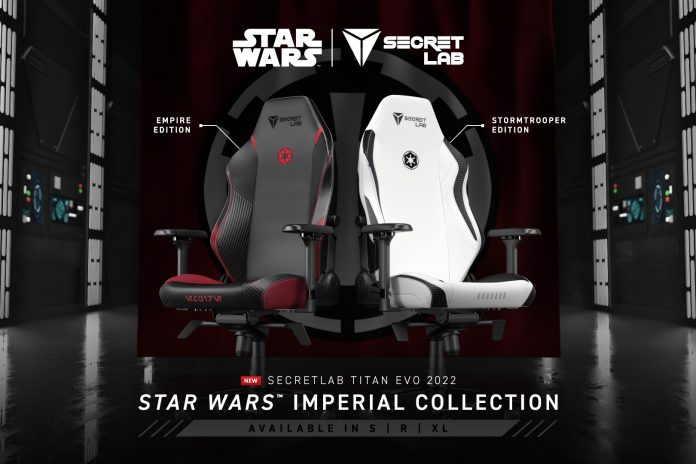 For their latest collaboration, Secretlab is heading to the galaxy far, far away with all new Star Wars themed gaming chairs!

That flapping sound you hear is my wallet scrambling to escape as this press release hit my inbox. Secretlab, one of the top companies handling office/gaming chairs has done a BUNCH of incredible themed chairs over the years. From the DC universe, to Game of Thrones, and even Mortal Kombat and Assassin’s Creed…they’ve got something special for fans.

Today, however, they’re adding a new theme to their TITAN Evo series chairs; one fans have been hoping/waiting for: Star Wars. The Imperial Collection consists of two chairs, the Stormtrooper and Galactic Empire chair. Both look impressive and would look amazing in my office…just saying.

Inspired by a galaxy far, far away…. Award-winning gaming chair specialist Secretlab collaborates with Lucasfilm to create the Star Wars | Secretlab Imperial Collection for fans of the dark side of the Force, paying homage to the legacy of one of the most beloved entertainment franchises of all time. Over the past four decades, Star Wars has inspired an expansive range of merchandise, cultivating a multi-generational fanbase that is known for its passion in themed room setups — the all-new Star Wars | Secretlab Imperial Collection featuring chairs with graphics depicting the Galactic Empire and the iconic Imperial stormtroopers will make the perfect addition to any fan’s gaming environment.

“Star Wars-inspired Secretlab chairs have been one of the most highly requested collaborations from our community and Star Wars fans alike, and it’s amazing for us to now be a part of Star Wars’ 45-year legacy with this new collection. We opted for minimalist designs in our chairs, identifying the coolest elements of the Empire’s aesthetics and imagining what would fit naturally and tastefully into any Star Wars-themed home setup. I think we’ll be seeing some really impressive creations from fans with them,” said Alaric Choo, co-founder and Chief Strategy Officer at Secretlab.

Inspired by the elite troops of the Galactic Empire, the Star Wars | Secretlab Stormtrooper Edition is upholstered in white leatherette with black textured ribbing on the side wings and embroidered lines on the back of the chair, mimicking the armor of white plastoid plates that the soldiers wear over a black body glove. As stormtroopers trained to render total allegiance to the Emperor, it is only fitting that the Imperial Crest features prominently on the front and back of the Stormtrooper Edition. “Stormtrooper” in Aurebesh is also embroidered on the back, a nod to the most common written language used across the Star Wars galaxy.

The Star Wars | Secretlab Empire Edition brings a piece inspired by the character of Darth Vader™ right to any Star Wars-themed home “battle station” with the Imperial Crest similarly taking center stage on the chair, this time in the Empire’s signature red and black colors. The Aurebesh translation of “Empire” occupies the front edge of the chair, with textured ribbing reminiscent of Darth Vader’s armor marking the back of the chair — a gaming throne fit for those who choose to fulfill their destiny.

Pre-orders for The Imperial Collection are live now over on Secretlab. Which one are you snagging?